The Japanese Yen remains dominant over the US Dollar with USD/JPY’s long daily chart downtrend channel still very much respected.

That channel has been in place since the peaks of late April. The Greenback has managed to tick higher in recent sessions. Moreover, on Thursday it was reported that Donald Trump will meet President Xi Jinping on Saturday in Osaka, where both leaders will be for the Group of 20 summit meeting. This prospect seems to have given risk appetite a broad lift, with investors hoping that here will be at least some opportunity to get vexed trade talks back on track.

So much for the fundamentals. Technically, USD/JPY bulls will probably need to break above the current channel top of 108.05 and keep the rate above that if they are to try and release some of the recent pressure. 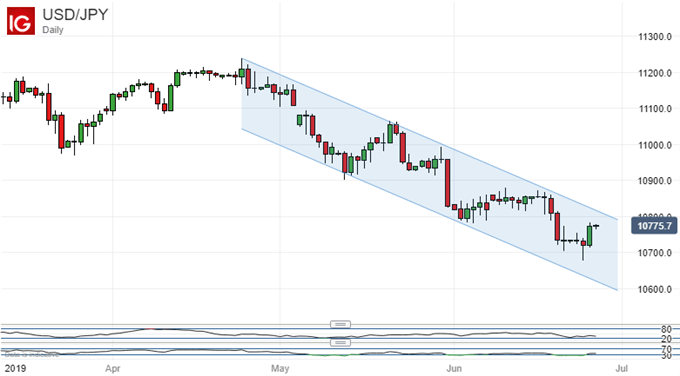 It’s worth pointing out that that channel top has been respected to the upside quite clearly, so any clear upside break would be a significant statement of intent from those bulls. However the Dollar is essentially back to lows we haven’t seen against the Yen since early April, 2018 on its daily chart, if we tune out the ‘flash crash’ lows of January this year.

The pair bounced this month very close to the 106.77 level. Probably not at all coincidentally that is also the fifth, 76.4% Fibonacci retracement of the rise up from the lows of March 2018 to the peaks of October the same year. They haven’t been topped since. It’s probable then that this level is extremely significant and that any fall through it confirmed by a weekly or monthly close is likely to put focus on complete retracement. That would take the pair all the way back to 104.64.

The Australian Dollar meanwhile has managed to pull itself up at last above the long downtrend which had previously capped the AUD/JPY market since mid-April. Fundamentally this action is probably rooted in AUD/USD strength, with markets moving to price in lower US interest rates even as Australia’s authorities seem to be wavering a little when it comes to big domestic reductions.

It will be interesting to see whether the Aussie can retain this poise against the Japanese unit beyond month end. If it can then the last significant peak will be back in play. That’s June 9’s 76.06. Conversely and slide back below the downtrend line will put the year’s lows back in uncomfortable focus for Aussie bulls who still have much to prove.