The Japanese Yen remains in the ascendant. This is unsurprising given shaky global risk appetite, rooted in the long-running US-China trade dispute and now bolstered by major protests in Hong Kong.

There’s plenty of impetus on the ‘USD’ side of USD/JPY, with markets now more and more convinced that US interest rates won’t rise further. Indeed, the chance that they may rather fall next month is put at more than 85% currently by the Chicago Mercantile Exchange’s ‘Fedwatch’ tool

Still, technically speaking USD/JPY has run into at least a hiatus on its undoubtedly bearish daily chart. For sure the long downtrend which has been in place since the highs of late April. This hiatus takes the form of broad range trading. The precise barriers of the range vary of course depending on whether one looks at intraday peaks and troughs or sticks with daily opens and closes. 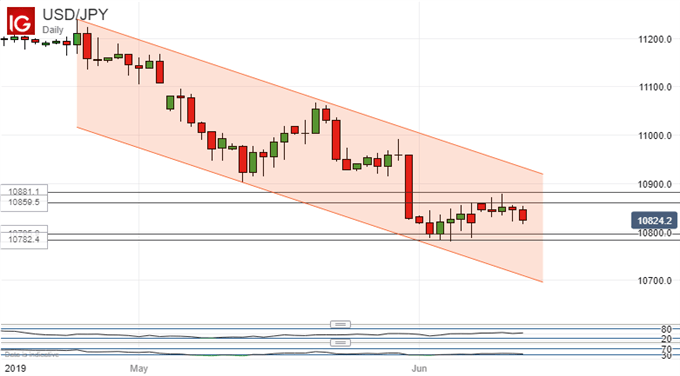 This range has held good since the sharp falls of May 31 and it seems reasonable to assume that a break, when it comes will set near-term direction. Currently the pair is right in the center of its prevalent downtrend channel, however, and it seems very premature to talk of that braking either way.

If the current trading band snaps to the upside focus will be on channel resistance at 109.33. That’s quite a long way above the market though and I don’t expect a near-term test. Channel support lies at 107.16 and that seems more likely to be revisited first given current price action.

The Australian Dollar very often plays the opposite role to the Japanese Yen in foreign exchange markets. With its close correlation to global growth prospects thanks to a variety of factors, not least Australia’s raw material exports to China, it’s one of the most pro-risk currencies out there. It’s hardly surprising therefore that it should now be losing its battle with the Yen and it assuredly is.

AUD/JPY is now within a whisker of its daily-close lows for the year which were struck on January 10 at 0.7427.

The cross’s fall seems to have halted just north of the 61.8% Fibonacci retracement level of its monthly chart climb up from the post-crisis lows of 2008 to the peaks of 2013. That comes in at 0.7429. Should that give way on a monthly close then there won’t be much support for the Aussie between there and those 2009 lows. Retracement all the way down to 0.5500 could be a real prospect over the longer term in that case.