The Japanese Yen remains on the back foot against the US Dollar but for all that USD/JPY bulls have yet to retake the key upside target they’re aiming at.

The pair has been in a clear daily chart uptrend since March 22. Gains since have taken the Dollar back above both the first and second Fibonacci retracements of its 2019 rise, levels which were both surrendered on the way down, if only briefly in the case of that second one. 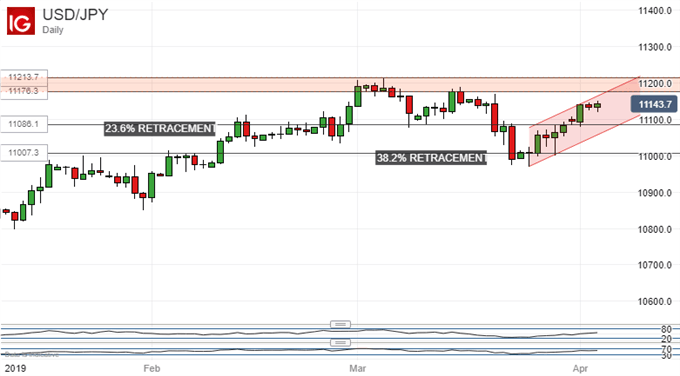 However, for all its bullishness the Dollar has yet to top the previous significant peak on a daily closing basis. That was March 15’s 111.76.

Now admittedly that level is very close to the current market and, should the uptrend endure then a break is only a matter of time. All the same, bulls will want to see that break pretty soon, and then move on to a display of comfort in the band between it and the year’s high of 112.14

The Dollar is heading towards looking a bit overbought in the momentum stakes, but a period of consolidation within that band would probably augur well for more gains ahead.

That said there is a clear risk on the daily chart that the pair is in fact topping out below that former significant high and poised to make a potentially bearish ‘lower low.’ That in turn would put market focus back on those retracement levels as key support.

With all that in mind, where the pair closes out this week could be most instructive.

The British Pound is unsurprisingly weaker against the Japanese Yen and much else, with ongoing Brexit travails weighing on the currency.

GBP/JPY has slipped below the uptrend channel which had previously bounded trade since January 15 and was, in any case, only an extension of the bounce which began on January3. So far it’s fall has been quite modest, however, with support at 144.00 holding the bears for now. 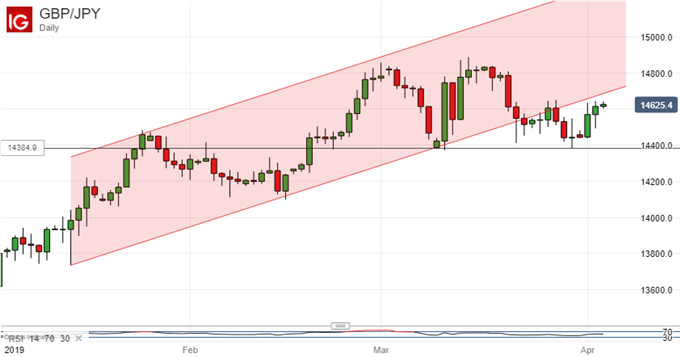 Immediate daily chart resistance comes in at the former channel support of 146.74, with a retake of that suggesting a higher high from the previous significant top of 146.01. That’s a sight which might put heart into the bulls but this cross will remain very vulnerable to UK newsflow.