The Japanese Yen has come under pressure against the US Dollar in the past week, after a period of clear range trading ended with a break to the upside.

USD/JPY had clearly been stuck between the 50% and 61.8% Fibonacci retracements of its climb from the lows of 2018 to the peaks of the same year. However it has now made it through the top of that range in a well-respected uptrend channel from January 10 which still looks well-worth following.

The channel top was just about exactly where the most recent foray higher stalled last week, and the pair remains very securely above the channel base. That comes in a reassuring distance below the current market at 109.28. 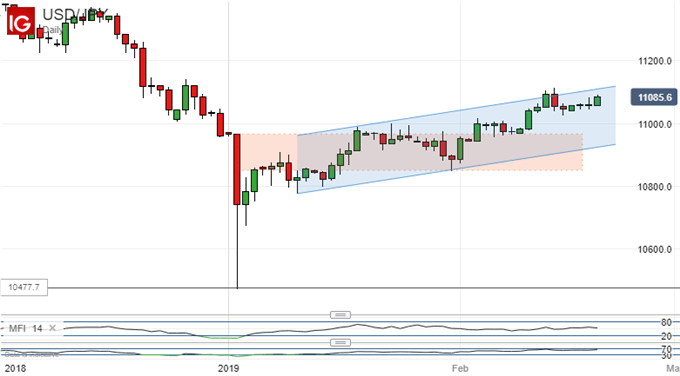 Neither an approach nor a retest of that looks very likely in the near-term, with another try at the range top far more likely. Still, the last few sessions have produced the narrower ranges which can indicate some indecision in the market. If that indecision results in a little slippage then that could represent a better buying opportunity for US Dollar bulls.

However, the pair’s Relative Strength Index remains quite subdued and certainly doesn’t suggest that the Dollar is anything like overbought at current levels. Taking that with the security of the current uptrend might suggest that the most likely path for USD/JPY remains the one higher.

The Australian Dollar has also managed an upside move against the Japanese currency, quite possibly feeding on the strength seen in USD/JPY. The Aussie’s former downtrend has been broken, if not yet terribly convincingly. If its bulls really want to stake a claim then their first target is the previous significant high. That is from February 5 and comes in at JPY79.86.

Admittedly that is not very far from the market now, but a few daily closes above that would solidify the bullish case nicely.