The Japanese Yen has weakened a little against the US Dollar in the past week but the fundamental impulse behind this looks murky and USD/JPY’s upside range break probably requires more validation to really convince bulls.

The Japanese Yen took a modest hit from the revival in risk appetite occasioned by the US Federal Reserve’s clearly increased caution as to the likely pace of interest rate hikes this year. The US Dollar also got a boost via weakness in its Australian cousin after the Reserve Bank of Australia’s Wednesday admission that record-low domestic rates may yet fall.

So much for the fundamentals. To be sure USD/JPY has now poked above its previous trading band. That was a range not coincidentally bounded by the 50% Fibonacci retracement of 2018’s climb to the North and the 61.6% retracement to the South. (109.64 and 108.50, respectively). 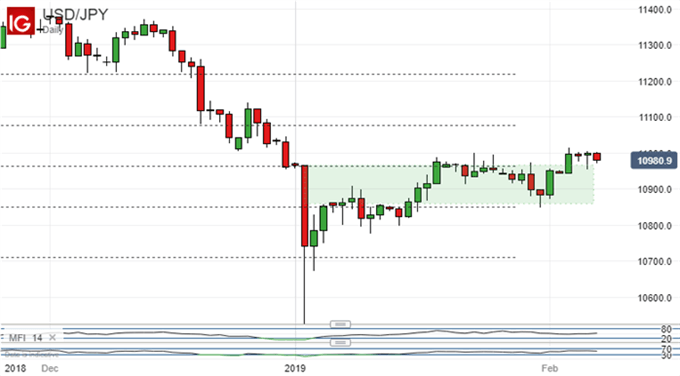 Still, Dollar bulls have not shown huge resolve against the Japanese currency and it will be interesting to see whether this half-hearted upward foray can survive a weekly close.

If it can then the last significant peak will remain within their sights. That comes in at 111.42, the intraday top of December 26. The pair’s ability to hold around this level will be key to its ability to retake the 113.22 level. This would be a pretty strong bullish sign as it would mark the retaking of ground lost in the long fall which started on December 14.

Still, for the moment US Dollar gains look tentative, and it seems more likely that the pair will slide back into its old range without some leftfield economic news to give it a near-term lift.

The Australian Dollar has been hit across the board by a renewed lack of interest-rate support, and AUD/JPY has been no exception. That cross looks to be locking itself back into a downtrend channel, with a cluster of support from earlier this month in immediate focus.

On current showing this seems unlikely to hold and the Australian Dollar is likely to maintain a broad bias downward even if a test of this channel’s lower reaches doesn’t look likely anytime soon.

Whether you're new to trading or an old hand DailyFX has plenty of resources to help you. There's our trading sentiment indicator which shows you live how IG clients are positioned right now. We also hold educational and analytical webinars and offer trading guides, with one specifically aimed at those new to foreign exchange markets. There's also a Bitcoin guide. Be sure to make the most of them all. They were written by our seasoned trading experts and they're all free.