Remarkably, the Japanese Yen looks set to end a tumultuous 2018 very close to where it began against the US Dollar. At present USD/JPY is around 112.38, which is only a whisker above the 112.72 level chalked up on January 1. That’s really not a lot to show for a year’s worth of action. 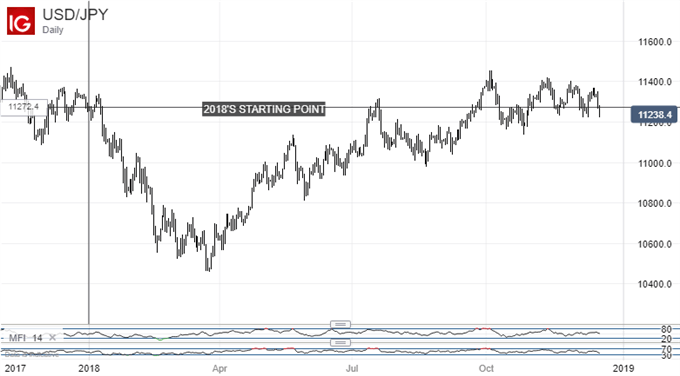 However, a close look reveals perhaps a degree of resurgent Yen strength. USD/JPY has just fallen on a daily-close basis below an uptrend channel which had previously contained the market since May 29 and which was in any case an acceleration of the rise from the lows of March.

It seems likely that Dollar bears will remain in control for as long as the pair remains below that channel base. Downside targets while that’s the case will come between 112.35, the current significant low, 111.79 where the pair tended to bounce between October 15 and 26 and 111.39 the intraday low of October 26. That final level is also the Dollar’s lowest point since September 12. 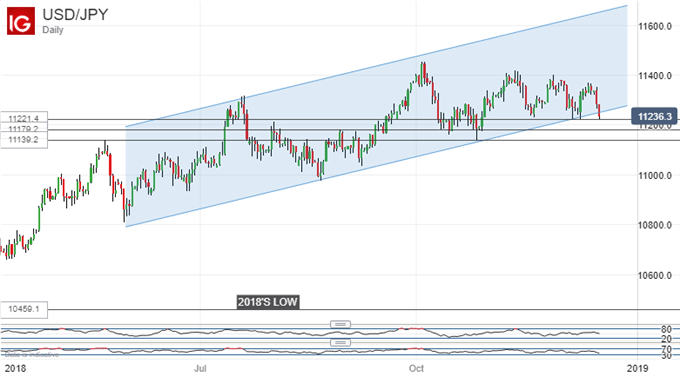 Still as long as those levels hold, Dollar bulls can probably remain relaxed. However it’s worth pointing out that the final Federal Reserve monetaryu policy decision of the week is due on Wednesday, after which markets are likely to shed volume quickly as the holiday season looms.

These factors could exaggerate any moves and may see USD/JPY slide a litle further than would otherwise be the case. However it would probably be wise to await a return to full trading strength before assessing the validity of any near-term move.

A fiarly similar pattern is evident on EUR/JPY’s daily chart. However the Euro remains quite comfortably above recent key support.

This comes in at 127.50 and, while it endures, it looks as though the broad trading range in place since November 11 remains in play.