The Japanese Yen has benefitted this week from a surge in risk aversion which has seen USD/JPY retreat all the way back down to the dominant uptrend line.

So far that line has held, but it remains far from certain that it will do so if it faces further tests, so the question must be whether the pair is now looking at a meaningful reversal or just another spasm within the overall uptrend. 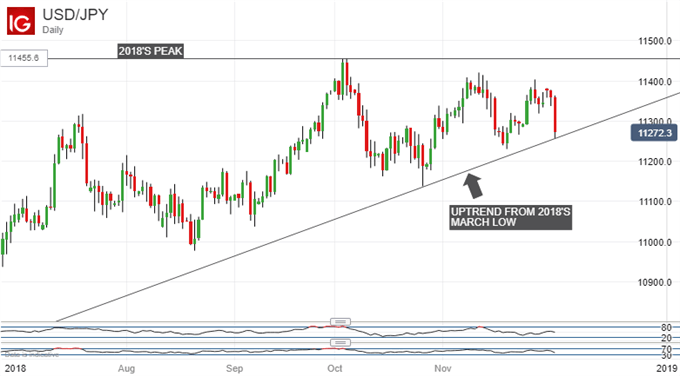 Obviously a daily or weekly close below this uptrend line would be bad news for US Dollar bulls. And it is perhaps notable in any case that USD/JPY now seems to have printed two clear ‘lower highs’ since it retreated from the 2018 peak, struck on October 3. Those bulls have something to prove.

Still, USD/JPY remains for the moment above even the first, 23.6% Fibonacci retracement of its rise up from the lows of March to that peak. That comes in at 112.16. Below that there looks like being strong support at the second retracement level, 110.74.

As long as USD/JPY remains above that then it’s arguable that Dollar bulls should remain sanguine. The fundamental interest-rate outlook continues to support the greenback massively against its Japanese rival and, in a less risk-averse market climate, the Dollar should continue to do well.

Still, it seems to be under pressure for the moment and the coming weeks could offer bulls better buying opportunities.

Meanwhile GBP/JPY has been dragged still lower, with Brexit woes adding spice to more general risk aversion in the case of this currency cross. 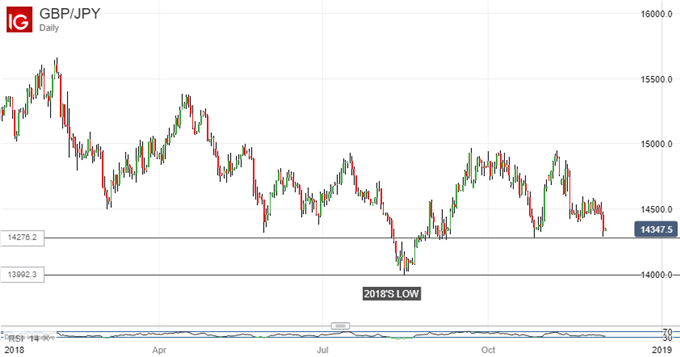 The Pound has fallen back once again to the lows which have already held the bears in check twice this year, once in September and again at the end of October. They may yet hold again, and the uncommitted might be well-advised to wait now and see if they do.

However if they break on a daily or weekly closing basis then the year’s low at 139.92 will be back in those bears’ sights.