The Japanese Yen seems to be posting gains against the US Dollar, although of course market action this week may well be clouded by the US Midterm election, now under way.

Still, USD/JPY has slipped below the newish uptrend channel which had previously contained trade since the lows of October 26. 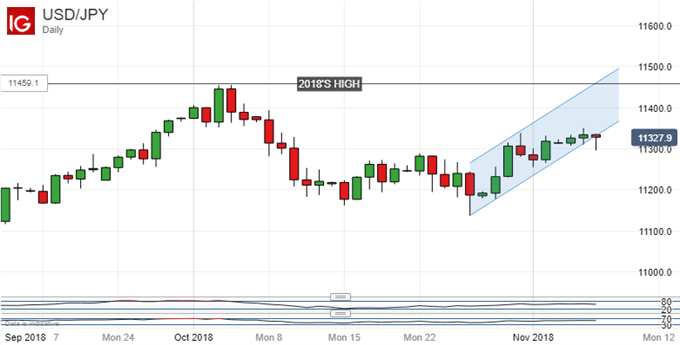 Still, that slip has only been intraday in nature so far, and may yet go unconfirmed by a daily close. If it remains so then Dollar bulls will retain the upper hand and can still dare to dream of revisiting 2018’s peak. That was the JPY114.59 level hit on October 3.

On a fundamental basis the Dollar really ought to be able to get back to that level. The Federal Reserve remains unstinting in its view that US interest rates have further to rise. The Bank of Japan meanwhile seems equally certain that its own ultra-accommodative monetary settings will be staying put until inflation revs. Still those, Dollar bulls already had quite a lot of work to do in overcoming the series of falls which took USD/JPY down from those early October highs. Noise from the Midterms will not make that task any easier.

If the pair does stage a decisive downside channel break, then there is probably near-term support in a band between JPY112.10 and JPY 112.82. This area was where trade focused around mid-October and it might hold initial bearish forays, probably depending on how the US vote leaves markets.

That area also contains the second, 38.2% Fibonacci retracement level of the long climb up from the lows of March to those October highs. It comes in at JPY 112.20. Falls below that might mean that Dollar bulls were in more serious difficulties, but the overall uptrend from this year’s lows remains intact. I would still expect USD/JPY to make a new 2018 high before 2018 bows out, even if it need not be too far above the present peak.

The Japanese Yen is exhibiting clear weakness against a mildly resurgent Australian Dollar meanwhile. AUD/JPY has gained for seven of the last ten trading days.

Still, Aussie bulls will need to top the previous significant high and hold there if this latest burst of enthusiasm is to stick. They have not done so yet. That high still lies above the market at JPY82.50 or so. If they can get there and hold their position this week than the pair could yet go higher. If they cannot however then support doesn’t look strong anywhere much down to the JPY80.50 level of late October.