Japanese Yen Technical Analysis: USD Fights Back, May Be Tired

The Japanese Yen continues to weaken against the US Dollar after USD/JPY turned away from a test of what might have been key support.

On a fundamental basis, the Japanese currency seemed to be gaining an upper hand in its battle of the havens with the greenback. Both currencies tend to catch bids when risk aversion rises, usually on the trade war worries which remain grimly prevalent between the US and China. However, in the past week or so stronger US consumer confidence data have underlined the yawning chasm in interest rate expectations between a Bank of Japan still committed to monetary easing and a Federal Reserve ready to tighten further.

Technically speaking this prognosis has seen USD/JPY move further away from a test of its dominant daily chart uptrend line. 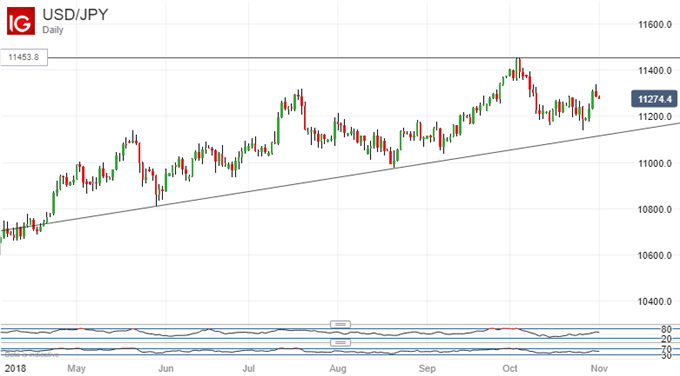 Respected now since May 30, this is in any case only an extension of the broader climb, which began on March 24. That trend comes in at what for the bulls will be a reassuring way below the market, at 11.78 or so.

With momentum indicators suggesting that the Dollar is by no means overbought, those bulls may well feel emboldened to take a stab at the last significant peak. That was the 114.04 reached on October 4. It is also this year’s high and a break of it anytime soon may see the pair set-fair into year-end.

Absent some fundamental sell-signal as-yet unknown, it seems likely that USD/JPY will get back up there this month, although whether the bulls will be able to consolidate for a significant push beyond the peak remains highly uncertain. It might also be good to see a little pause quite soon, too. The short-term, 20—day moving average has in the past couple of days crossed below its 50-day counterpart. This need not be a conclusively bearish signal, although is usually held to be just that. 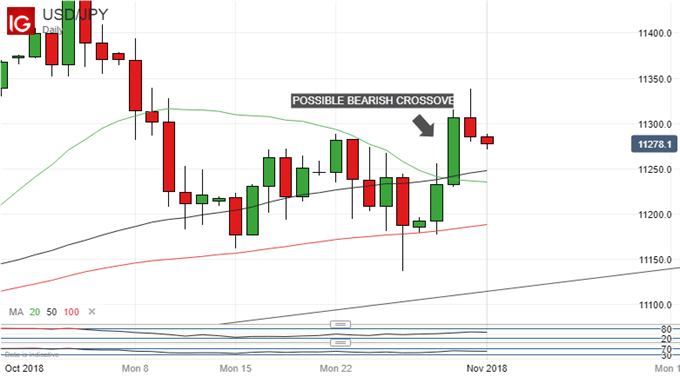 Still, it comes after quite a convincing upmove and at a time when the fundamentals clearly favor a higher Dollar.

The uncommitted may want to see how far any setbacks go, with the former range between 112.83 and 111.17 likely to provide support. If it does not then things might get more serious to the downside but gradual gains toward the year’s peaks seem a more likely outcome.

Meanwhile the Australian Dollar has also staged a little bounce against the Japanese currency, very possibly in response to the performance of USD/JPY.

However, Aussie bulls will have much work to do if they are to erase the effects of the sharp falls seen between October 2 and 10. Their first order of business must be to consolidate above October 10’s intraday top of 80.56, which now acts as near-term resistance.

Even if they can, however, respite is likely to be short as the pair remains well within the gradual, shallow downtrend that has dominated proceedings September 2017. Still, while current range lows hold there could be value in playing for a little short-term upside.