The Japanese Yen has staged a modest fightback against the US Dollar in the past week, but it may not get a lot further.

There doesn’t seem to be much obvious fundamental justification for the quite-sharp fall in USD/JPY seen since the pair made its highest point since November, 2017 back on October 3. There has perhaps been a rise in risk-aversion over the period in question, with trade frictions still all-too evident and the International Monetary Fund downgrading its global growth call. This is the sort of backdrop which usually favors perceived haven currencies and, while the Yen is certainly one of those, the US Dollar’s hugely greater yield has ensured that it, rather than the Japanese unit, which gets investors’ nods.

Technically, however, the Yen appears to have something of an advantage now. USD/JPY has slipped quite dramatically below the strong, newish uptrend channel that had previously bounded trade since September 7. 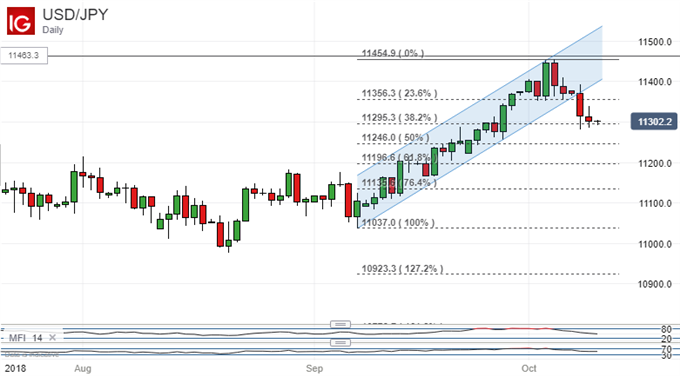 Tellingly the US Dollar has so far managed to hold above the key 113.000 level on a daily closing basis, and its ability to continue to do so may be important.That level also represents, near enough, the second 38.2% Fibonacci retracement of the pair’s rise up from those early September lows. If it gives way then 50% retracement at 112.50 or so will come into sharp focus.

However, I suspect that the fundamentals will reassert themselves soon enough in USD/JPY and, as they unarguably favor the Dollar, falls from current levels will probably represent a good chance to buy.For all its recent falls the pair remains very firmly within the longer-term uptrend channel which has contained trade since the lows of March. 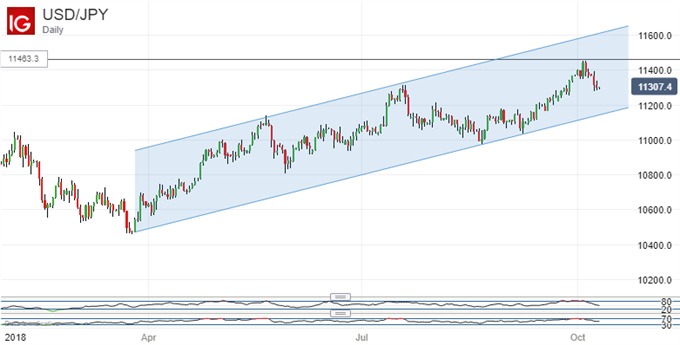 The Euro is exhibiting some similar daily-chart weakness against the Japanese Yen, having slipped below its own formerly dominant uptrend back at the end of September. However EUR/JPY remains supported by the 129.40 region which continues to hold on a daily closing basis.

It is quite difficult to see this support continuing to hold if USD/JPY weakens much further but for the moment it seems to be as far as Yen bulls can take this cross. Should it give way then the previous significant low of 127.75 will be all that stands between the Euro and retracement all the way back down to August’s 124 lows.