KEY TECHNICAL LEVELS FOR JAPANESE YEN RATE TO US DOLLAR:

USD/JPY is trading at 11-month highs with a focus on the November 6 high of 114.73. Since September, the pair has moved in a rather linear fashion, and despite being stretched, traders could see the gains extend.

Traders often know USD/JPY as the pair that fails to give you exactly what you want. Specific to this market, USD/JPY may fail to give traders a fair pull-back to re-enter as conservative risk management would suggest. This often puts traders in the bind of chasing the move, as in FOMO, or letting it play on knowing they’ve missed the move.

Intermarket Support for USD/JPY Seems Too Good to be True 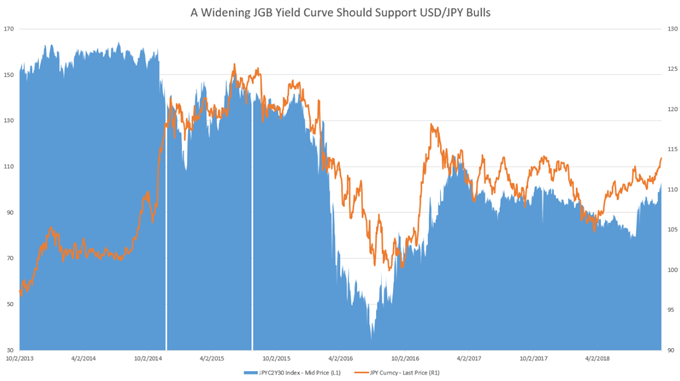 The correlated markets for higher USD/JPY seem to be firing on all cylinders. A critical market that often helps drive JPY-crosses, and USD/JPY is particular is government rates. With the BoJ recently stating they’re pulling away (or intend to) from aggressive asset purchases in the government bond market, the spread between the front and back end of the Japanese Government Bond (JGB) curve seen in blue above is widening.

The widening yield curve in Japan has had a strong influence on the direction of USD/JPY. Similarly, US yields, which tend to be a proxy for inflation concerns hit the highest levels on Wednesday since 2014, which is when USD/JPY was making its way up to 125 Yen per USD.

Lastly, cross-currency basis swaps, a little known, but highly influential measure of funding stress in the market is showing that US Dollars are harder to come by, and appear to be lifting the US Dollar as institutions begin their year-end hedging programs. In late September, the 26th to be exact, the demand or premium for US Dollars relative to JPY in currency swaps jumped aggressively beyond the covered interest rate parity price showing to the tune of 58bps in favor of USD.

While causation is not claimed, merely correlation, it is worth noting that the smallest amount of US Dollar premium in at least the last five years per Cross-Currency Basis Swaps came on March 27 when USD/JPY traded at the lowest level since December 2016.

The chart above is leaning upon the insights provided from Andrew’s Pitchfork. A few analysts of the technical persuasion have learned to love APs at DailyFX as they share with you the ‘road’ that markets are traveling upon, and when a behavior shift has taken place in the market.

The chart above shows a new pitchfork since the key pivots in February and March paved the way for the current impulse higher. The recent move has now taken the price above the pitchfork drawn around key pivots in Q4 2014-Q1 2015.

The recent surge above 114.06 has likely taken the fight out of the bears and given the intermarket support' traders may want to brace for new 2018 extremes to print if we remain above the key support levels. The Fibonacci extension applied above shows a target at 115.38, but that does not mean the move will end there if the support remains.

The bullishness will have proven premature on a break below ‘2’ on the chart at 112.04.

More Support for Your Trading:

Are you looking for longer-term analysis on the U.S. Dollar? Our DailyFX Forecasts for Q4 have a section for each major currency, and we also offer an excess of resources on USD-pairs such as EUR/USD, GBP/USD, USD/JPY, AUD/USD. Traders can also stay up with near-term positioning via our popular and free IG Client Sentiment Indicator.