The Japanese Yen is still foundering against the US Dollar but USD/JPY’s long bounce from its August lows has shown some signs of exhaustion this week.

The fundamental picture continues to strongly favor the US Dollar over the Japanese currency even if as seems to be the case both catch investor bids when trade war worries are to the fore. The Federal Reserve continues to raise interest rates even as the Bank of Japan leaves its own monetary taps wide open and still pledges to do so until consumer price inflation sustainably hits 2%. It was at just 1.3% in August, so there is still a very long way to go.

For now Japan’s short-term base rate remains at -0.1%, while the Federal Funds Target Rate band is 2-2.5% and rising. With this huge differential as the USD/JPY market’s fundamental underpinning, it is very hard to see the Japanese Yen gaining much traction. However, technically speaking USD/JPY’s rise looks a bit overdone now and some pause for breath is probably in order.

It is after all at highs not seen since late 2017 and starting to be a little overbought according to its Relative Strength Index which topped the danger point of 70 this week. 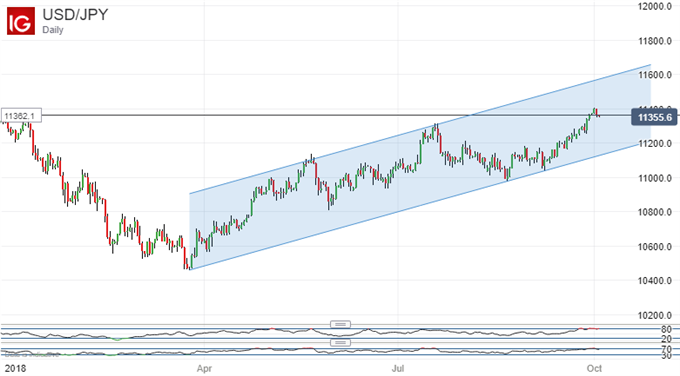 Still, it remains clearly within the daily-chart uptrend channel which has endured since March. The base of that is a very long way to the South of the current market, at 111.13 or so, and probably won’t be tested anytime soon.

However, the first, 23.6% Fibonacci retracement of the rise up from the lows of March to the current peaks comes in above it at 111.81, and consolidation could well see the pair come down as far as that. Assuming a base can be built between there and current levels then the bulls may well gird themselves to try for the next significant top, November 2017’s 114.82.

The Euro looks a little more defensive against the Japanese currency with its most recent daily chart channel clearly broken to the downside.

The overall uptrend from August's lows is stiill in place, however, but focus is now on a cluster of support between 131.00 and 129.41. September's low of 127.74 will likely to be in focus should it give way.