Japanese Yen buying has kept USD/JPY below its most recent high but the pair looks quite well supported nonetheless.

Fundamentally both currencies are locked in something of a ‘battle of the havens’ with both finding buyers in recent sessions when trade headlines and the woes of emerging markets have sapped risk appetite.

On its daily chart USD/JPY is still loitering around support at 111.13. Probably not coincidentally that level is where the first, 23.6 Fibonacci retracement of the rise up from the lows of late March to that recent peak (July 13’s 113.17). Support here looks firm, with Dollar bulls eyeing last week’s highs in the 111.77 region for as long as it holds. Consolidation there on a weekly closing basis would probably see them taking aim at July’s peaks once again. 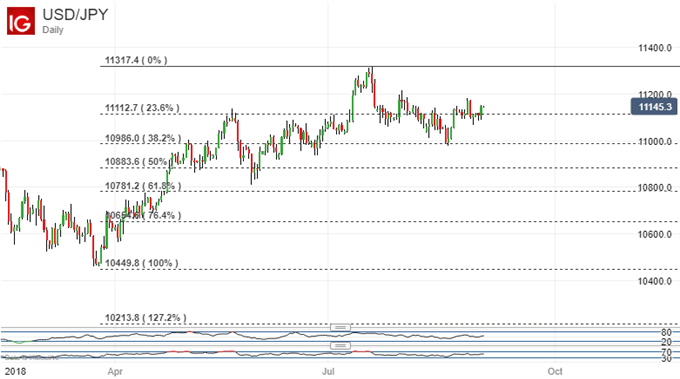 Should support give way, however, focus would immediately switch to the second, 38.2% retracement level. This comes in at 109.86 and is exactly the point at which the last significant USD/JPY foray lower was halted, back on August 20.

For now, however the pair appears to be in a broad uptrend channel which has endured since late May and which still looks worth playing. 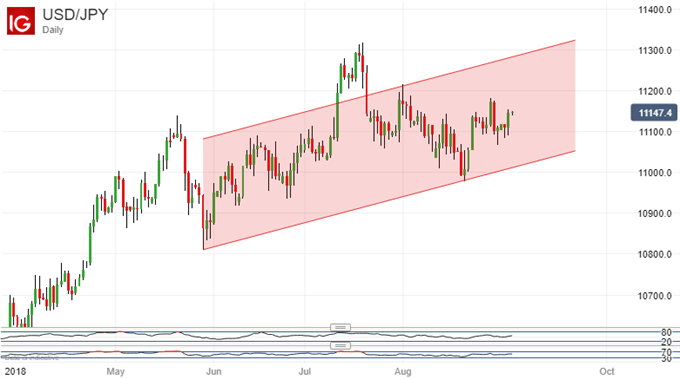 The Australian Dollar meanwhile has been taking a fundamental battering against its US cousin, which has translated into weakness across the board and not least against the Japanese Yen.

AUD/USD’s daily chart shows a break below the admittedly broad trading range which had previously endured since early February.

If Aussie bulls can’t make a move soon then the entire climb up from the lows of September 2016 could be in danger, putting lows around 75.90 back into uncomfortable focus.