KEY TECHNICAL LEVELS FOR JAPANESE YEN RATE TO US DOLLAR:

Putting A Price Consolidation In Context

A broader look at the US Dollar does seem to favor that we could see further weakness in the coming weeks as the largest speculative Dollar Index position in 52-weeks is failing to lift USD to new 2018 heights, which can be seen as s form of divergence.

The lack of further impulsiveness in the US Dollar is not only a small consolation for Emerging Markets (their pain would much worse if the USD strengthened very aggressively), but it should also put the USD/JPY move in context. The current set back in the US Dollar is aligning with a sideways consolidation in USD/JPY that may precede a stronger move higher. 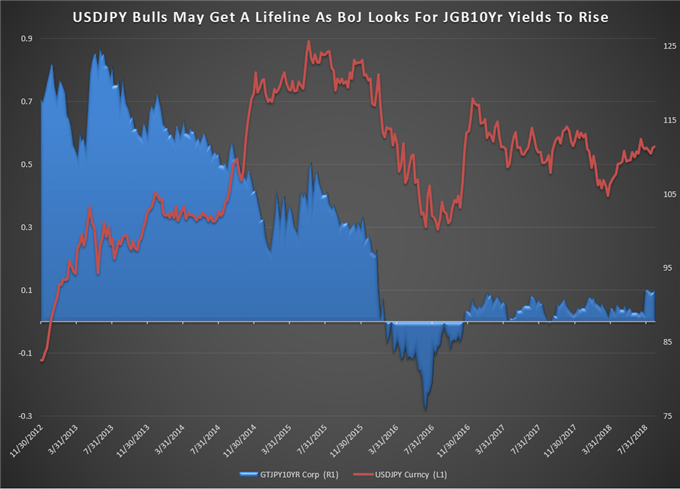 Recently, the Bank of Japan made a significant, albeit quiet adjustment to their monetary policy when they said they’d allow/ embrace a higher upper band for Japanese Government Bonds (JGB) 10-year yields from 10bps to the 20bps, and that may not be the final destination. This massive shift in BoJ policy of Yield Curve Control (YCC) is happening at a time when Japanese data is on the upswing, and JGBs are more data-dependent than they’ve been since 2012.

The chart above is designed to illustrate the point that when JGB 10Yr yields (blue area) have moved lower, the Yen has strengthened. As the JGB yielded positive again, the pair rose. Now that the BoJ is embracing a higher yield (i.e., they won’t step in to buy and keep a lid on yields), Japanese Yen crosses could be supported for further gains.

I have long spoken of the multiple year triangle pattern in USD/JPY that aligns with the truism earlier mentioned of consolidation tends to precede trend continuation.

The shorter-term picture focuses on the 100-DMA at 110.50 and the recent bounce at 109.92, which is the 38.2% retracement level of the 2018 range. A hold above there would make buying JPY (shorting USD/JPY a near exercise in futility) given the broader technical pattern that favors a bullish continuation when the time is right.

As noted before, some technicians are predicting a move toward 125.85 in USD/JPY, but first, we’ll likely need to see JPY weakness emerge against other key currencies like EUR/JPY above 137.5 or GBP/JPY above 147.05, which is a trade I’m actively watching.

More Support to Build Your Strategy: