Japanese Yen Technical Analysis: USDJPY Rally May Not Be Done Yet

The Japanese Yen is enjoying a modest resurgence against the US Dollar but it might be wise not to trust it quite yet.

USD/JPY certainly seems to have stalled short of what looks like key resistance. The bounce which began off the low of 109.78 hit on August 21 seems to have petered out for the moment at the 111.15 intraday high of last Friday. That level has some short-term significance, being the intraday high of both August 6 and July 23 and 24. 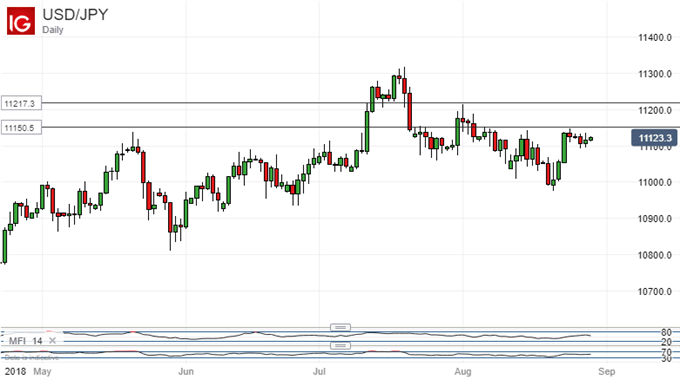 It is also very close indeed to 111.18 which is the first, 23.6% Fibonacci retracement of the rise up from thew lows of March to the peaks of last month.

It looks as though the bulls are going to have to top this at least on a daily closing basis if they are to again approach the most recent peak of 112.17, hit on August 1. That in turn guards the way back up to this year’s highs above 113, but there is no sign that the bulls have sufficient resolve to strike out that far in the near term.

Fundamentally, however, there seems little reason to prefer the Japanese Yen over the US Dollar, especially on interest-rate differential grounds. While the charts look a little inconclusive now, as indeed does investor positioning, it may well be best to play for another bounce close to those recent lows, with a test higher likely in due course as long as global headlines do not sap general risk appetite.

A fairly similar pattern seems evident in EUR/JPY too, indeed it can be seen to varying degrees across the Japanese Yen complex, with various currencies’ gains seeming to run out of steam before important previous highs have been matched.

In EUR/JPY’s case that peak is the 130.00 level reached previously on August 1.

Should the current rally fade before that point has been conclusively recaptured, then focus would be on the prior range, whose top comes in at 128.85. Trendline support lies within that band too, around 128.19 at current levels, but that is some way below the market. Retracement back to that level seems likely enough if the rally does indeed wane short of its previous high, but such a fall would likely take some time.