The Japanese Yen is making technical headway against the US dollar, with a key medium-term uptrend channel under clear threat in USD/JPY.

The channel in question has bounded all trade since the lows of March, and charted a quite impressive Dollar bull run since. 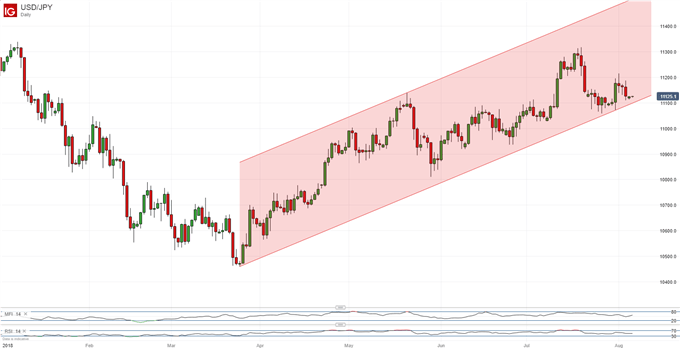 However, despite this ostensibly strong showing, it is surely notable too that the channel has not seen a major test of its upper boundary for some time now. Indeed the last one was all the way back on May 21 when the Dollar topped out at JPY 111.40. Since then USD/JPY has been much better acquainted with the channel’s lower reached, and it is now testing them more overtly than ever.

A slip below JPY 110.97 on a daily closing basis would see channel downside finally broken. 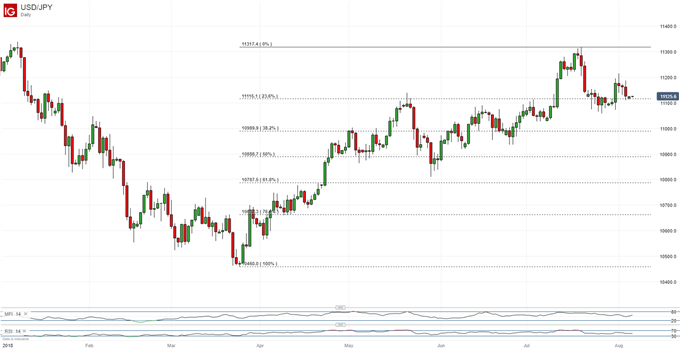 That would also mean that the US Dollar had fallen conclusively below the first, 23.6% Fibonacci retracement of the rise up from the lows of March to the peaks of late July. That comes in very close to the current market, at 111.14 and on current showing seems unlikely to hold if tested. The next key level-38.2% retracement- would then be in focus. That comes in at 198.90.

It is probably also worth noting the possible formation of a pennant on the daily chart. This combination of lower highs and higher lows is usually seen as a ‘continuation pattern.’ 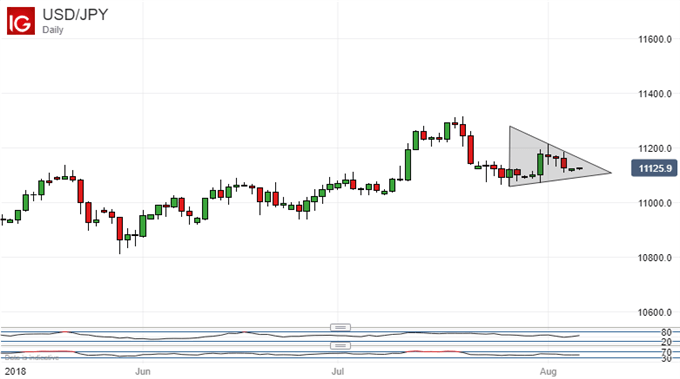 What that means is that the asset in question is likely to resume its previous trend once the pattern plays out. Disturbingly for Dollar bulls, this probably means that the slide from those July peaks could intensify.

The Yen is making similar gains against various other majors, notably the Euro and Sterling, however, the Australian Dollar seems to be holding up rather better against it.

AUD/JPY trade looks rather more range-bound than that of other Yen crosses. July 31’s intraday top of JPY83.18 and July 24’s low of JPY81.84 seem to be providing the limits for now.