Japanese Technical Analysis: USD/JPY Could Be Set To Bounce

The Japanese Yen has caught a quite strong haven bid this week as trade tensions between China and the US bubble back to the surface of market concerns once again.

Technically speaking however, US/JPY has tested the bottom of a minor uptrend channel which has been in place since May 30. It has survived, just but in any case the broader, longer uptrend which has bounded trade all through the year’s second quarter remains very much in place. 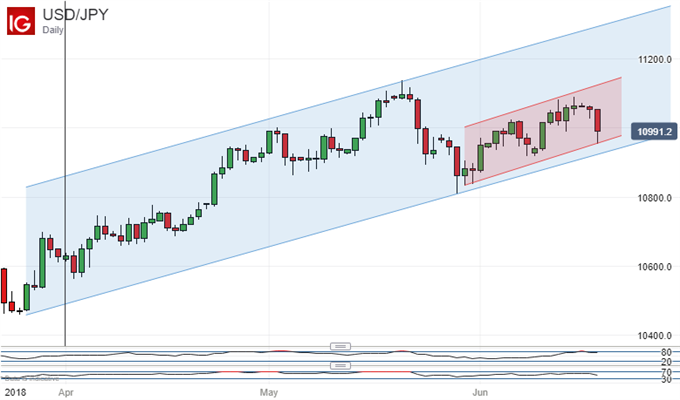 The Japanese Yen remains under considerable fundamental pressure from widely diverging interest-rate differentials with the US. The Federal Reserve has just raised interest rates once again and seems determined to continue the process for as long as the data allow. The Bank of Japan meanwhile has been forced to watch the modest inflation resurgence seen early this year collapse, taking with it any prospect that its own ultra-loose monetary policy can be unwound anytime soon.

This week’s official Japanese inflation numbers are likely to underscore that weakness and may put the Yen under renewed pressure, provided that no more bad news appears on market radar from the direction of global trade. Another bout of Yen weakness could see USD/JPY back up to its recent highs of 110.74 in quite short order. That said a return to late May’s peaks in the mid 111s seems unlikely unless some clear resolution to trade difficulties is seen- an unlikely short term prospect.

Reversals for the pair are likely to find support at this week’s 109.49 lows, with the broader channel base of 109.20 waiting below that.

The Japanese Yen’s haven bid has been pretty universal, with the Australian Dollar a particular target. AUD/JPY has been returned to the lows of late May which had not previously been seen since November, 2016.

The cross is now skirting 50% Fibonacci retracement of its long climb up from the lows of mid-2016 to the highs of September, 2017. That comes in at JPY81.40 and seems to be failing. A weekly close below that level would probably bring the next, 61.8% retracement into Aussie bear’s sights. That comes in some way below the market at JPY79.54.

Worryingly for Australian Dollar bulls the currency does not yet look notably oversold, judging by the cross’ Relative Strength Index, and it is likely that momentum to the downside has yet to dissipate.