The Japanese Yen remains on the back foot against a generally stronger US Dollar but there have been tentative signs of a little fightback in the past few sessions.

This seems reasonable enough on fundamental grounds. The US Dollar has itself perhaps benefitted from some haven-bid interest. This has come in the face of investor worries about the US nuclear-diplomacy position on Iran, political spits in Italy and ongoing concerns about global trade. The Japanese Yen generally plays the haven role too, so a bit of bullish activity should perhaps not surprise us.

It is important not to overplay it though. Technicall,y USD/JPY remains in the uptrend which has dominated proceedings since the lows of late March.

However, the highs of early February- around 110.30- continue to stymie Dollar bulls and are starting to seem a quite-formidable barrier. The pair seems to have topped out below them for now, and even that uptrend channel is facing a downside test on the daily chart. 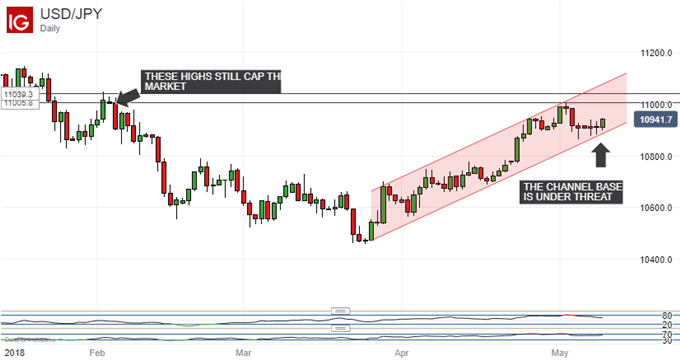 So far it has survived it, but the channel bears watching nonetheless. If -as seems likely- USD/JPY settles into a range between its recent low of 108.69 and May 2’s high of 110.05, then a break of the channel to the downside seems inevitable over the next couple of days.

Whether such a range would be merely consolidative, presaging another push higher, or the marking of a new, lower high, is difficult to say. The pair does not look overbought by any standards, and its moving averages don’t suggest a breakout either way.

A good short-term strategy might be to play for upside while current support levels hold, but bear in mind that the bulls are leaving it rather late if they actually have the resolve to take out those February peaks.

The Australian Dollar meanwhile had settled into broad range trading against the Japanese Yen, and the range was at least some way above the lows of late March. That fact may have given some comfort to Aussie bulls. However AUD/JPY now seems to be wilting toward those lows once again. The current range base of JPY81.20 is under immediate threat and, if it gives way, then those March lows at JPY80.56 will be back in focus.