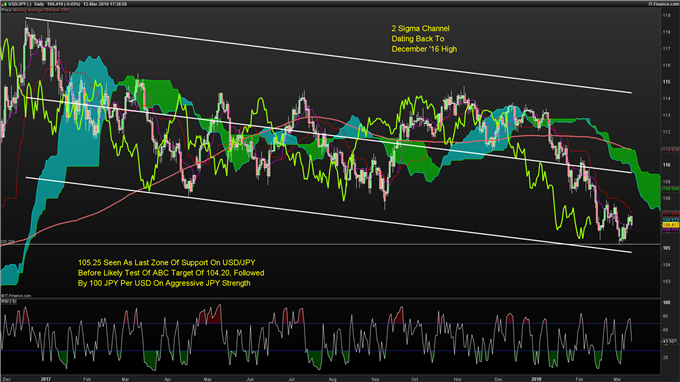 After trading in a rather tight sideways range of a few hundred pips, USD/JPY may have found a volatility catalyst in the Moritomo scandal that has recently resurfaced. Nikkei News Asia said it best, and most succinctly when they said, “The revived scandal threatens Prime Minister Abe's grip on power."

Either way, the USD/JPY downtrend remains entrenched below on closes below 107.095 (spot at 106.43), and institutions are looking for the broadening potential that USD/JPY could retest 100 if the scandal erupts.

Understanding Moritomo, and its potential Impact

Typically, scrubbing names from official documents of high ranking officials is a bad sign. Recently, Japan’s government released confirmation that scrubbing the names of Prime Minister Shinzo Abe and his wife, Akie along with Finance Minister Taro Aso had taken place around a land scandal that is said to benefit Shinzo Abe’s wife.

While Aso is blaming the subordinate who made the scrubbing known, the focus of markets is on Shinzo Abe’s statement that he’d resign if any link surfaced linking him or his wife over the disgraced property deal offering heavy discounts on public land to ultra-nationalists.

The JPY has yet to break the March range of 105.25-107.20. However, news that Abe’s key minister, Aso will skip the G20 meeting and further developments on the Moritomo Gakuen, the educational foundation with supposed nationalist agenda could cause the monthly low to break. The break would likely happen quick if Abe’s political future based on his promise last February were likely to be exercised ending his bid to become Japan’s longest running Prime Minister.

USD/JPY Rate Forecast Looks to Ichimoku for Downside Bias Below 107.095

On the price chart with the Ichimoku Cloud technical study applied alongside a 2 sigma channel dating back to December 2016. Per Ichimoku, trader can see that the price has traded below the cloud (seen as broad resistance in a downtrend), and the Kijun-Sen or 26-period midpoint since January 10 when the price broke below 112.50 and traded to as low as 105.20 in early March.

105.25 was the closing high in October 2016 before the Trump Election kicked USD/JPY higher to 118.66 by mid-December, less than two months later. Per Ichimoku, the lagging line remains below price from 26-periods ago favoring bearish momentum remains in play.

Unlock our Q1 forecast to learn what will drive trends for the Japanese Yen and the US Dollar! 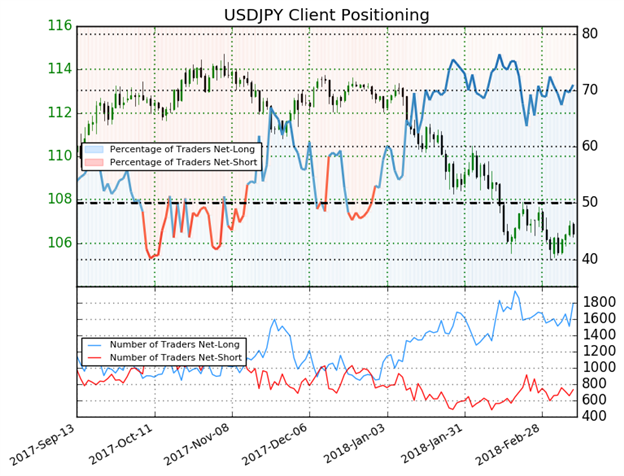