Traditional trading wisdom (which hasn’t been of much use lately) argues that a strong JPY aligns with global risk-off sentiment. Typically a strengthening JPY would favor a sell-off in risk assets as well as high-yielding currencies (e.g., NZD, AUD, EMFX, etc.)

US Dollar Falls toward Opening Low of 2015

A trader who has been watching the market knows that while the JPY has been strong, risk-on sentiment has been stronger. The development should bring traders attention to the USD. As the opening range of 2018 gets set, the US Dollar Index has traded at the lowest levels since the opening week of 2015.

While the weakening USD is confusing for some (including yours truly) given the rate hikes forecasted and strong US economy, the message underlying the weakness is the valuable take away. The message is that markets are appearing to be entering a phase of blatant risk-seeking behavior. Such an environment should lead to an increasingly weak USD.

As the US Dollar looks to weaken into 2018 persistently, the JPY sees subtle strength for a reason not seen since the launch of Japan’s Qualitative and Quantitative Easing (QQE) program. Subtle shifts in the Bank of Japan’s asset purchase program are causing market participants to question if the support for a weakening JPY is dissipating.

Last week, we discussed the potentially silent taper by the BoJ after they cut purchases of debt maturing in 10 to 25 years and for those in more than 25 years on Tuesday. The reaction was that traders are buying the yen and selling Japanese government bonds on speculation that it signals tapering or slowing down of their attempt to weaken the JPY to support the economy.

The argument for ending this program is viewed as two-fold in that the economy of Japan is building enough momentum to stand more on its own accord and potentially that the BoJ is slowing down as the number of available assets they can purchase dwindles and potentially limits their marginal power.

Check out this EUR/JPY analyst pick here that has yet to trigger.

On the price chart with the Ichimoku Cloud technical study applied, traders can see that price has broken below chart support. With Ichimoku, there is a bearish signal confirmed when the lagging line breaks below the cloud alongside price. The cloud base is near 112.30, but looking to the future Kumo (cloud), traders can see conviction if building to favor further downside.

Another signal can be taken from looking at the prior breakdowns in USD/JPY when the lagging line broke below the cloud alongside price. In early- and mid-2017, the breakdowns of USD/JPY below the Ichimoku cloud brought a move of 4% and 3.5% respectively. A similar move to the two witnessed in 2017 would see USD/JPY likely break toward the 2017 low of 107.40 or lower.

Unlock our Q1 forecast to learn what will drive trends for the Japanese Yen and the US Dollar to open 2018! 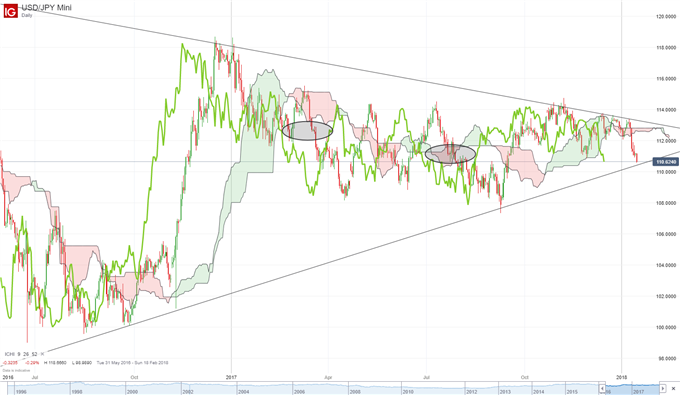 The resistance of USD/JPY can be taken from the top of the Ichimoku Cloud at 112.80. The spot rate is 110.70 so 210 pips away from the spot is the level that my trading bias would shift from bearish to neutral. A shift to bullish would require another 95-pip gain to 113.75, the December high. 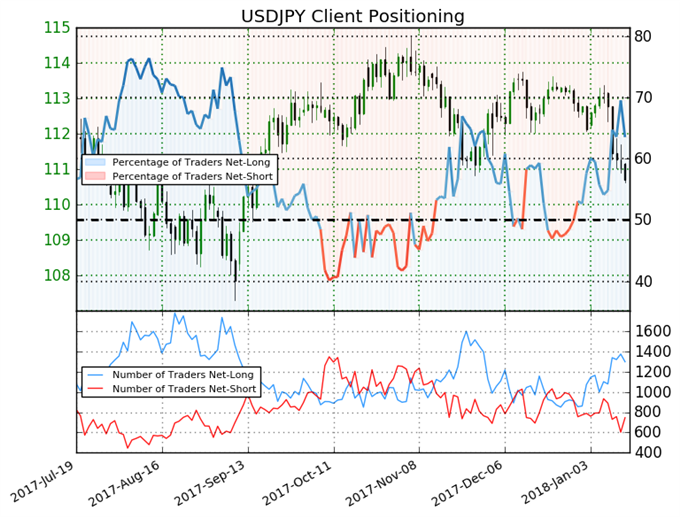 The sharp rise in retail positions, coupled with the rise in short-positions provides a contrarian bias to favor further gains.