The US economy continues to roll on as evidenced by November Nonfarm Payroll data released on Friday, which continued to give traders reason to buy the US Dollar. The US Dollar is working on its best week of 2017 when looking at consecutive daily gains that align with seasonal factors that tend to see the US Dollar strengthen at year-end.

US Dollar Strengthens On Strong Headline

The USD/JPY price initially dropped in the hour following the release of the November US employment data, but was then bid for the rest of the day and ended the week higher by nearly 1%. Traders looking to other JPY pairs also saw weakness as EUR/JPY, NZDJPY, and AUD/JPY also ended the trading week near the high of the weekly range.

Typically, wide-spread JPY weakness is seen when there is wide-spread Bullish risk-sentiment, and the massive stock of Japanese investor capital is sold to buy foreign assets with improving yield prospects. In such a scenario, traders tend to look for the strongest relative currency to buy against the JPY, and in the last few weeks, the US Dollar is making its case. FX traders started the week positive on the British Pound Sterling (GBP) but cooled off optimism after reports that Brexit negotiations were making progress as uncertainty remained that will slow down eager GBP buyers.

Another sign of USD strength continuing is seen in funding markets, known as basis swaps. A dollar premium in USD/JPY 3-week basis swaps per Bloomberg data shows dips in USD are likely to be limited and gains could continue.

A key development over the recent week has been signed for optimism in Japan’s economy. However, traders should not expect the Bank of Japan to use this as a reason to slow down their asset purchases and reduce monetary easing yet. Traders questioned whether such growth would lead to a BoJ exit that would strengthen the JPY, but so far traders do not seem concerned.

A key pattern of central bankers is to let the economy seemingly ‘over-heat’ before discussing monetary policy tightening little alone reducing accommodation. A large question mark remains China, whose growth heavily effects Japan (and everyone else), but as inflation prospects in Japan rise and global growth look synchronous, we could soon see a period of impressive Japanese economic strength with an accommodating Bank of Japan that helps lift JPY crosses higher.

The market forces heading into year-end are favoring the USD/JPY rate to test chart resistance at 114. The price remains below the highest level in six-months of 114.73, but a hold above the December 6 low of 112 with rising yields from the UST 2Year would anticipate further strength. USD/JPY trading at the highest level in nearly a month on Friday have traders anticipating a test of key resistance.

Should the price break the 114.73 level on a closing basis, which is possible with the Federal Reserve set to raise rates next week, fighting the uptrend would be ill-advised. On the other hand, if the Federal Reserve sends a dovish warning, which is unexpected given the trend of strong US economic data, traders should watch the 112 level as support. A break below 112 on a closing basis could well lead to a retest of the 6-month range support near 108. Until 112 breaks, the uptrend remains favored.

Unlock our Q4 forecast to learn what will drive trends for the Japanese Yen and the US Dollar by year-end! 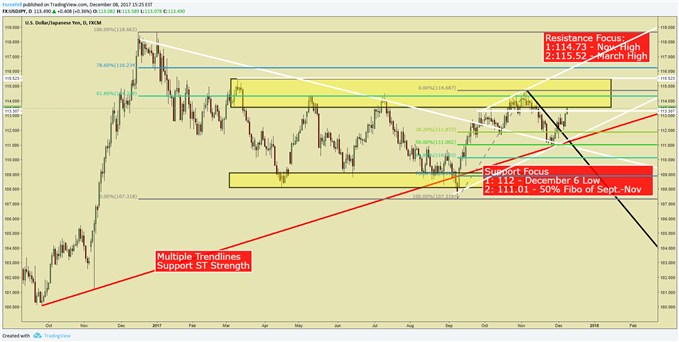 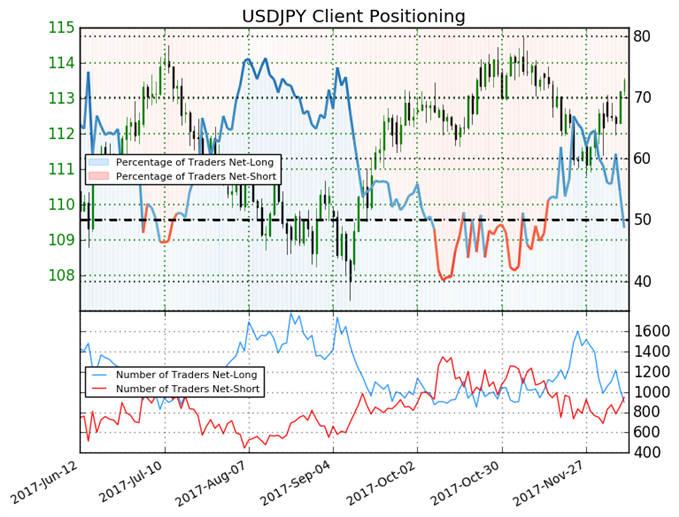 The sharp drop in long retail positions, coupled with the rise in short-positions provides a contrarian bias to favor further gains.