Hedge funds are likely patting themselves on the back, for now. Data from the CFTC showed they added to short JPY positions last week, which, if held, definitely played out well on Monday. Multiple risk-off scenarios that were feared last week going into the weekend failed to play out. As a result, the JPY sold off, and USD/JPY rose by the most in 8 months as the US Dollar rebounded.

The real action in JPY shorts may be seen in CAD/JPY or GBP/JPY, which traded to the highest level since November 2015 and 1-month highs respectively. USD/JPY pushed above 109, but recently traded on Friday to the lowest level of 2017 at 107.32. Validating the push higher in JPY was the SPX closing at a record high.

The technical picture seems to favor a continued bounce as a failed breakout, meaning the move to new 2017 lows did not hold or extend could lead to the aggressive unloading of long JPY positions. One theme that has plagued 2017 is that a plethora of potential risk-off scenarios have failed to stick to the wall, which happens in Bull Markets for stocks like we’re currently witnessing.

Adding to the Intermarket view that USD/JPY could see a continued bounce after failing to extend lower below 108 is the sentiment picture. IGCS is showing a decline of net-longs, and an increase of short exposure. As a contrarian indicator, a failure to hold an extreme level followed by retail traders adding exposure in the direction of the failed breakout if further evidence to favor a rebound.

While an across the board USD rally is not favored, it’s worth keeping an eye on weak currencies like the JPY that could benefit tactical USD longs. On Monday, we also saw a rebound in expectations for a December hike by the Fed. While still below 50%, which is considered priced in, it’s fair to say that a push higher in odds would align with USD strength, especially against weaker currencies like JPY. 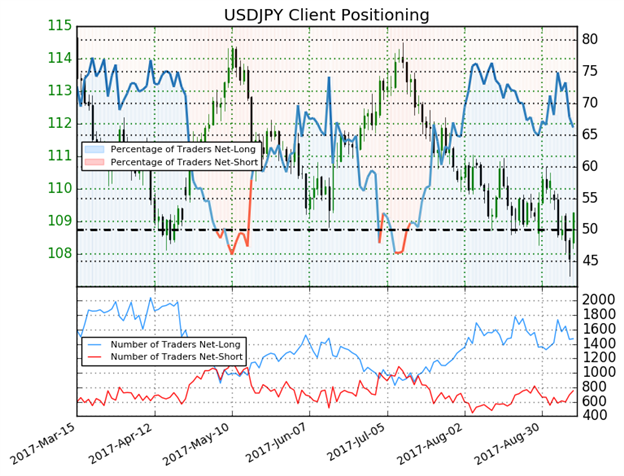 We typically take a contrarian view to crowd sentiment, and the fact traders are net-long suggests USDJPY prices may continue to fall. Positioning is less net-long than yesterday but more net-long from last week. The combination of current sentiment and recent changes gives us a further mixed USDJPY trading bias (emphasis added.)