What can traders expect from USD/JPY in a year of US rate hikes? Here are our thoughts.

Short-term traders may be encouraged by the ~100 pip reversal after Janet Yellen stuck to the script that the Federal Reserve will likely hike again in 2017 after Wednesday’s hike of the Fed’s upper bound and still expect to hike three times in 2018. The Fed is also very close the normalization of the balance sheet that ballooned from ~$880 billion to $4.5 trillion during the Fed’s QE regime of 2008-2014, which is also expected to strengthen the USD. However, despite a favorable background, the trend is still clear, and it’s lower unless the price can break above a few key levels of resistance.

On the chart below, you will notice a confluence of resistance that holds my attention from 110.50 to 112. If the price on a daily chart is unable to close above this zone, I will maintain a bearish bias, which aligns with the signal from IGCS.

Let’s break down the thick resistance that will need to break before the bias would shift from bearish to neutral. At 110.45, you will find the 200-DMA and the June 12 high. At 111.05, you’ll see the 55-DMA. At 112, you’ll see the top of the Ichimoku Cloud, which is a longer-term trend indicator. If price can break and close above this thick zone of resistance, it’s fair to say the Bears are no longer in control and it may be the Bulls turn to have some fun.

One key data point worth watching on the horizon is the Bank of Japan announcement on June 16. The results will be displayed on the DailyFX Economic Calendar, but what traders will likely be watching is whether or not the Bank of Japan feels that the recent Japanese Government Bond market volatility warrants action. If they do, it’s possible that the resistance zone mentioned above is broken as well as my bearish bias. We’ll see. 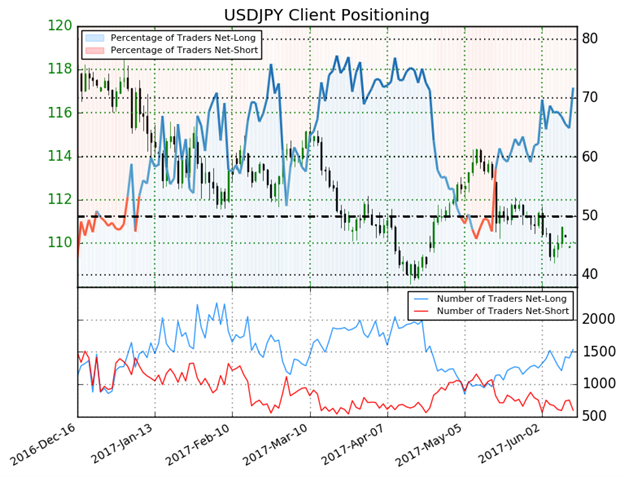 What do retail traders’ buy/sell decisions hint about the JPY trend? Find out here!

We typically take a contrarian view to crowd sentiment, and the fact traders are net-long suggests USDJPY prices may continue to fall. Traders are further net-long than yesterday and last week, and the combination of current sentiment and recent changes gives us a stronger USDJPY-bearish contrarian trading bias.(Emphasis Mine)

The takeaway from me for IG Client Sentiment on USD/JPY is that longs are getting more aggressive on a daily and week-over-week basis. In taking a contrarian view, this opens up the likelihood of further breakdown continuing Wednesday’s price action. A persistence below resistance and a subsequent break below 108 with this sentiment picture holding could precede an aggressive breakdown.