Will Yields Continue To Drive JPY in 2Q? See our forecast to find out what’s driving the biggest market trends!

USD/JPY is working on its first close below the 200-DMA since the US Election outcome was announced on November 9. JPY remains the strongest currency in G10 with EUR the current weakest followed by USD, due to the few other currencies having a persistent supportive environment for currency strength. On Friday, the market got news of a soft Consumer Price Index that underperformed on both core and headline measures alongside Retail Sales.

In addition to Friday’s soft US data, we have Sunday’s first-round of the French election adding to a favorable environment for USD/JPY shorts. If the polls continue to show momentum for Mélenchon and Le Pen, we could continue to see the JPY strengthen as the options market continues to show traders buying puts on JPY crosses as protection. Such action in the options market also favors spot-exposed traders exiting their trades until the waters become less choppy. However, depending on who battles in the anticipated run-off for French President on May 7, we could continue to finish the month of April and the open of May.

Many traders are rightfully focused on the possible run-off between the surprising rise of Mélenchon to challenge La Pen and the outstanding favorite, Macron. A Macron win would likely be least favorable for JPY longs and most favorable for USD/JPY longs given that the market sees Macron as the least likely to stir concern about France abandoning the Euro.

Looking at the chart, a trader would be well served to keep an eye on IG trader sentiment (discussed below) and the 200-DMA as possible new resistance. If the price remains below the 200-DMA and the IG Trader Sentiment holds a bearish signal, we could be on our away to approaching 106.84, which is the 61.8% Fibonacci retracement of the August-December price range and the close of Nov.10.

Should price reverse higher, and we see the 200-DMA hold as support, which is not anticipated in the current macro background, the appropriate price level to focus on for USD/JPY is the March 27 low of 110.10 followed by the April 4/ 11 high of 110.92. The absence of a close above 110.92 alongside the sentiment picture explained below remaining in its current state since January 9 will keep the bias bearish. 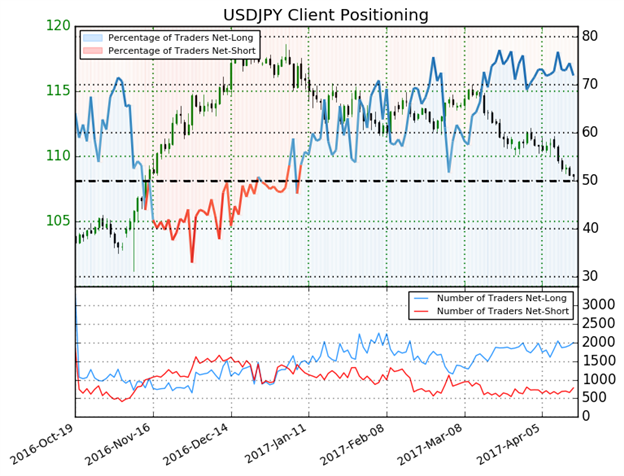 What do retail traders’ buy/sell decisions hint about the JPY trend? Find out here !

We typically take a contrarian view to crowd sentiment, and the fact traders are net-long suggests USDJPY prices may continue to fall. Positioning is less net-long than yesterday but more net-long from last week. The combination of current sentiment and recent changes gives us a further mixed USDJPY trading bias. (Emphasis Mine)