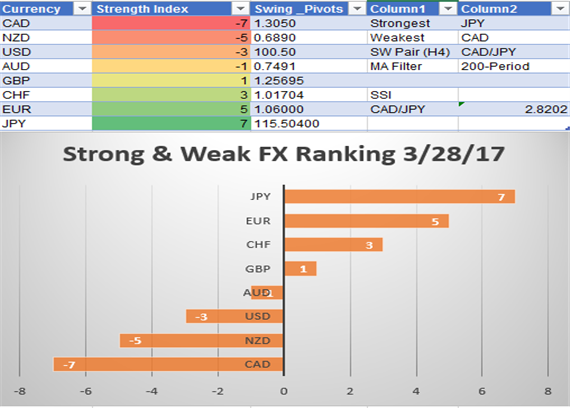 For those of you watching yields in the US, you know there has been a move into Treasuries on a one-two punch of the “Bearish Hike” from the Fed who failed to give USD Bulls who had already bought the currency something new to cheer and bring in more buyers. A week after the hike, which had seen yields come off, we saw a failed political push to repeal a prior standing health care act. The market took the failed overhaul to pass by the supermajority as a sign that the market was likely getting ahead of itself in putting faith in the new administration to pass thestimulus to bring about inflation.

This fundamental backdrop that brought lower yields has also brought USD/JPY lower as USD weakens on fewer prospects of more rate hikes than anticipated by the Fed. You can see below the USD is sitting with the rest of the Commodity FX Bloc as the relatively weakest G8 currencies at the end of March.

The technical picture aligns nicely (for the bears) with the fundamental picture. In short, we are seeing a clear alliance of a bearish fundamental outlook with lower yields (price moving higher) and higher JPY. The chart pattern that we focused on last time was a bear flag pattern, which is identified from a consolidating pattern that finishes by rejoining the trend, which for 2017 has been lower.

The price target for a bear flag breakdown is a 100% extension of the first move lower from the lower high. Where traders should take note is that the bear flag target (108.400 is a mere 20 pips away from the 200-DMA (108.20). This makes for a nice price target on the downside if you’re a trend follower and a nice stop losslevel if you’re a trader looking to buy USD/JPY before a presumed move higher.

For now, the bias will remain lower with obvious counter-trend moves along the way that are expected to lack follow through. The invalidation of the bearish view would be a move back above the 114 (Daily Ichimoku Cloud).) A move above 114 would argue that the breakdown on the bear-flag did not have the follow through and momentum to carry through, but I would watch UST Yields move above resistance as well as an Intermarket confirmation on such a countertrend development. 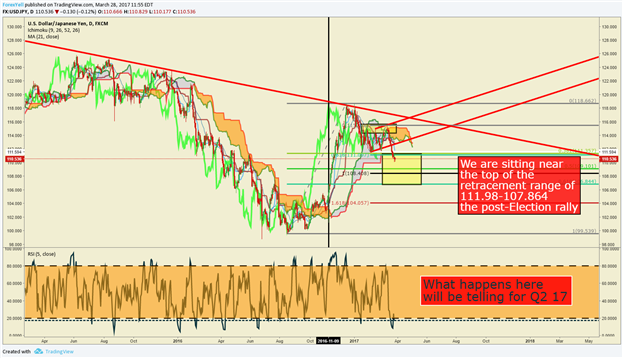 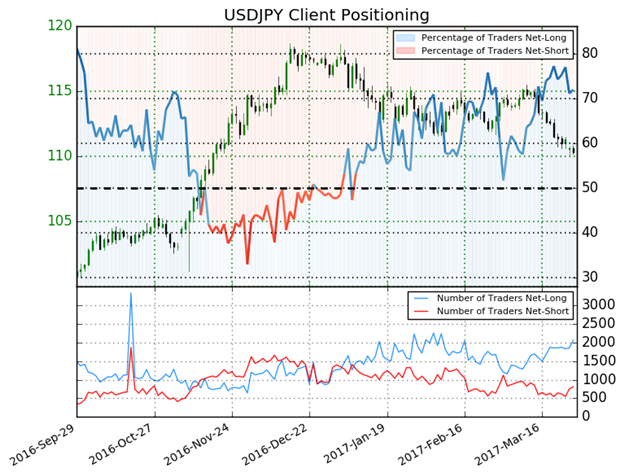 USDJPY: Retail trader data shows 72% of traders are net-long with the ratio of traders long to short at 2.57 to 1. In fact, traders have remained net-long since Jan 09 when USDJPY traded near 116.998; the price has moved 5.7% lower since then. The combination of current sentiment and recent changes gives us a stronger USDJPY-bearish contrarian trading bias. (Emphasis Mine)