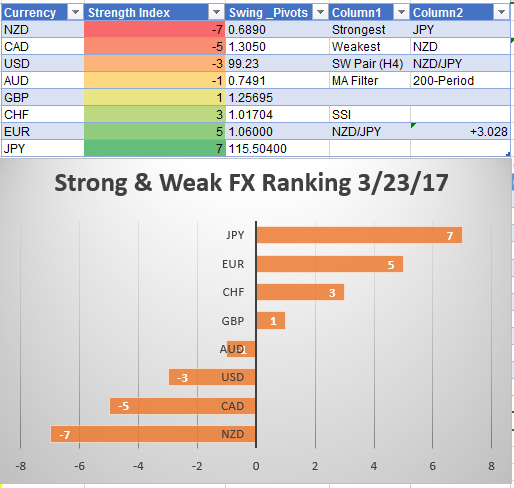 JPY strength, alongside EUR strength, has become the lead story after the Federal Reserve’s Dovish Hike in mid-March. On Wednesday, the Japanese Yen surged to the highest level (which took USD/JPY lower) of 2017, and it’s uncertain what would stop the trend. The low on Thursday morning was 110.63, but there is scope for a move to the 50% retracement of the post-election rally should JPY strength continue, which looks to be developing from the JPY money markets.

Japanese Money markets via, the 3-month JPY LIBOR have risen more aggressively after the Dovish-Hike than USD LIBOR. The decreasing premium has aligned with JPY strength against the USD. While the BoJ is not expected to give the Fed a run for the mosthawkish central bank, a decreasing premium could continue to boost JPY against USD should the trend continue.

On the chart below, which is shown in logscale, you can see that the price is also sitting below the bottom of two price channels. The larger channel is drawn with Andrew’s Pitchfork, which has framed price very well, despite the post-election volatility. In addition to trading below thesupport of the larger channel, we are also trading below Bear Flag or a corrective channel support.

The focus should now be on signs of continuation that a breakdown from Bear Channel support may open up a move toward 110/108 on JPY strength, which aligns with the 50, & 61.8% retracement of the post-election price range.

Despite the bearish tone, a trade above 114.48 would show an overlapping price structure that would negate a near-term Bearish view. Until then, we’ll keep an eye for a price break of channel support given the larger environment that may support pending JPY strength and USD weakness. 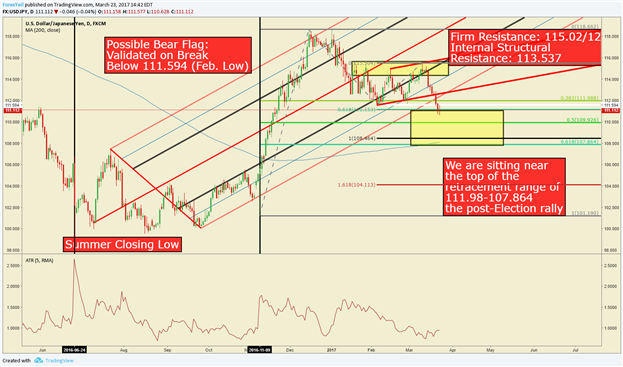 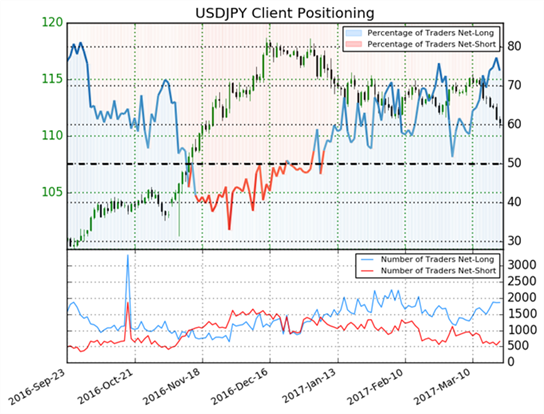 USDJPY: Retail trader data shows 75% of traders are net-long with the ratio of traders long to short at 3.04 to 1. In fact, traders have remained net-long since Jan 09 when USDJPY traded near 116.998; theprice has moved 3.3% lower since then. The combination of current sentiment and recent changes gives us a stronger USDJPY-bearish contrarian trading bias. (Emphasis Mine)