JPY strength continues into the close of February and in anticipation of President Trump’s speech that will be analyzed for details on the timing of stimulus that could revive the reflation trade. There is a strong positive correlation to yields of US Treasuries and USD/JPY and a clear message from President Trump that inflationary inducing policies are on their way would likely help boost USD/JPY. Lack of details could keep the market on its current course of giving back-post election gains, most notably in JPY crosses. An additional fundamental note worth considering is that March is the last month of the Japanese Fiscal Year, which may lead to further JPY demand in the coming weeks from Japanese accounts that could push USD/JPY lower.

As of Tuesday, the Japanese Yen is the strongest currency in G8 FX on a relative basis, when analyzed on an H4-chart against a 200-DMA. From a momentum perspective, it’s difficult to tell when the momentum will stall. Traders who track momentum can look to RSI(5) on the Daily Chart to see if a higher low in RSI(5) aligns with the chart support of the Ichimoku Cloud and Andrew’s Pitchfork drawn from the closing low of last Summer. The 100-DMA also aligns with the Ichimoku Cloud base at 111.74.

Lastly, traders who utilize sentiment via SSI in their analysis should note there has been a large surge in long orders in USD/JPY. SSI is currently +2.7344 on USD/JPY as 73% of retail traders are currently long. We use our SSI as a contrarian indicator to price action, and the fact that the majority of traders are long provides asignal that the USDJPY may continue lower. The trading crowd has grown more net-long from yesterday and last week. The combination of current sentiment and recent changes gives a further bearish bias.

The chart shows the momentum in 2017 has been Bearish. Momentum is famous for pushing past the point of expectation so Trader’s may want to think twice or reduce counter-trend trade size on USD/JPY.

Trader’s looking for a breakout will likely focus on the February high of 114.95 to validate that the Bull trend from Q42016 is resuming. Selling the strongest currency, which the JPY currently is, is ill-advised due to the momentum component and the lack of subsequent sustainable USD strength.

The US Dollar has stabilized recently, thanks in part to the re-emergence of geopolitical risk in Europe with upcoming elections that have subsequently kept EUR near the bottom of the relative strength rankings in G8FX.

Tonight’s speech from President Trump could breathe new life into the Bulls that seem to have taken 2017 off so far. If we get a breakout higher in USD pairs in favor of USD, we should keep an eye on an aggressive shift in positions or add to early reversal bets. Such a move could make March an exciting month for trading. Without such a reversal, we’ll anticipate further low volatility and USD-weakness. 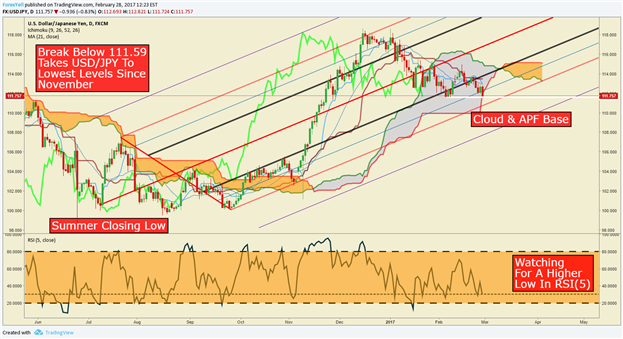