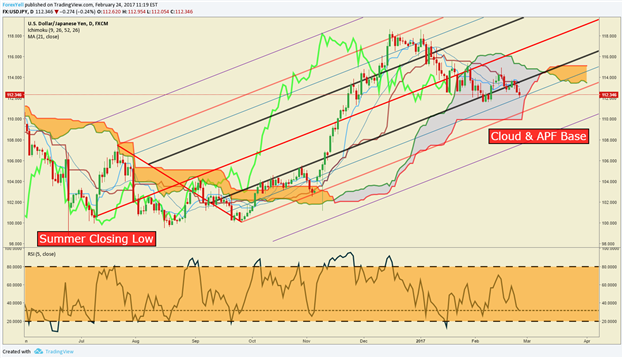 The Japanese Yen has quietly snuck into the top spot of G8 FX on a relative basis. One of my core trading rules is never to sell the strongest currencyand never to buy the weakest currency until a significant technical shift has developed.

On Friday morning, USD/JPY fell near 112 but did not hit the breakdown target illustrated in Tuesday’s webinar of 111.78. The price of USD/JPY now looks poised to test the February low at 111.594. In addition to the Febarury low, the 100-DMA sits near 111.73, and if neither of these levels hold as support, we could see the persistence strength persist. The SSI reading of +2 seem to favor the move lower into and possibly through support.

The move lower seems to align with the drop in global equity indices and a move back into the recently-hated treasuries, which have not seen the yield fall toward 2.32. The yield on the US 10yr has fallen ~6.5% in February, which has correlated well to both a soft-USD and persistent JPY.

You can see on the chart below the USD/JPY has trended quietly lower and is now approaching two key zones of advanced Technical Analysis support. First, the Ichimoku Cloud Base and the lower median line of Andrew’s Pitchfork drawn from the Closing Summer Low, which has done a fine job of framing price action since October.

The relative ranking is based on a 240-minute chart with a 200-period moving average applied, and the ranking is based on an indexing of whether a currency is often above or below the 200-ma against a multitude of currency pairs. The strong JPY reading and subsequent weak EUR ranking means they are on the winning and losing side, respectively of the 200-MA against other currency pairs.