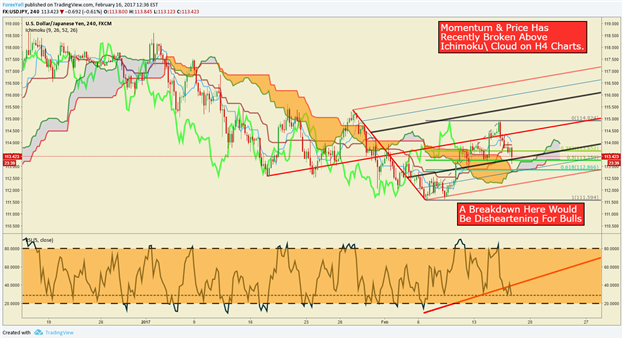 USD/JPY should have everything going for it right now as the US Equity market continues to push higher, and the Federal Reserve looks awfully close if not already at its dual-mandate target of ~2% inflation and full employment. However, USD/JPY is struggling near 114 and has recently been offered as UST 10Yr yields look a bit shaky and Gold remains on a Bullish course along with other commodities.

As a trader who looks around for clues on themes to trade and sees what could be around the corner, it can be almost as valuable to find what the market is not doing (i.e. buying USD) as it is doing when a certain backdrop appears.

Looking around at the broad market landscape, there could be a technical and Intermarket powderkeg developing that is worth watching and if a proverbial spark is lit, it could lead to a large amount of JPY strength. For now, the weak and unwanted USD is unlikely to stand in its way. Per Bloomberg, Short exposure for the ETF tracking the S&P 500 has historically high assets with an aggressive rise in bearish bets despite the 10% run-up post-election. This rise in Bearish bets could show anticipation that we’re about to see a risk-off move that would likely align with further JPY strength.

I mentioned in yesterday’s DXY piece that Janet Yellen’s comments on her suspicions about the current administration being able to pass through all of the fiscal policy and the possible harm that proposed and passed immigration reform could do to destabilize the labor market may be to blame.

However you want to look at it, Traders seem suspect that even if the Fed follows through with their anticipated three hikes in 2017 that the USD is worth bidding up. One reason could be is that all the positive assumptions are priced into the USD at this point, and we’re unlikely to get a further USD boost from already known monetary policy divergence. If that’s the case, we could soon see the surprises leaning more to the upside for JPY and EUR should their Yield Curve begin to steepen due to inflation pressures showing up.

The chart below shows what looked to be an honest breakout on the swing charts, and there is still no proof that we’re definitively heading lower. The short ETF exposure, continued strength in Gold and persistently weak USD do not help the upside argument, but they do not seal the downside argument either. You can see that the price and momentum component of Ichimoku (green line) has recently broken above the cloud. This could mean that a deep correction was in the works, but it could also mean that a reversal or breakout is forming, and we should be on the watch for both.

A break above Wednesday’s high at 114.92 will likely be the entry point for many Bulls to enter long in the belief we’re resuming the 5-year uptrend and the stop loss point for many Bears who feel the 2017 trend of USD weakness is set to continue. Either way, I do not see a clear picture on the charts alone, and the background information that is USD Bullish isn’t appearing to encourage the bidders to come out and buy.

The persistent USD weakness in 2017, and the inability of USD to go bid on such an encouraging backdrop of economic news releases have been favoring a breakdown, which would appear more likely on a daily close below the 61.8% retracement of the February range of 111.594-114.924 at 112.866. Additionally, a break and close below the drawn Andrew’s Pitchfork would encourage the argument that we have not been able to hold a Bullish structure and would also encourage the 2017 trend continuation lower. A hold of this level and a subsequent break above 114.924 could show that the aligning forces of JPY strength may remain on the sideline for now.

When considering the background and the Technical Picture, it may be helpful to know that given the positive US data, a downturn would likely continue to push USD/JPY much lower as many positively correlated markets to USD/JPY are considerably elevated and a breakdown in those correlated markets may align with aggressive downside in USD/JPY toward 110 or lower.