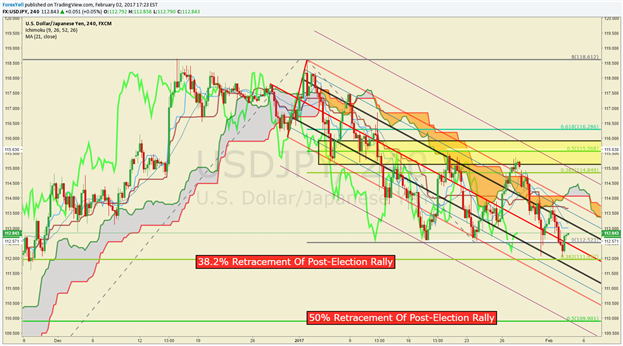 USD/JPY continues to be a pair that trades in a direction opposite to what many anticipated at the start of the year. On the back of a large move higher, relatively speaking, in the front-end of the curve helped by the Federal Reserve pushing up the median number of hikes lifted USD/JPY to as high as 118.61 in mid-December. Since then, we’ve traded as low as 112.05 on Thurday morning.

A lot of politically-based risk aversion stories have come on the scene in the past few weeks, but looking past the media coverage, you can see a flattening of the US yield curve and a continuation of the multi-week downtrend in USD/JPY.

We often say that price is the best indicator as it’s the only fact on the chart. Everything else is suspect to interpretation but what the price is or was t a specific point cannot be argued. The move lower within the clearly identified range shows an unwillingness for traders to aggressively buy USD in the same manner that they did in November and the first half of December, while JPY continues to oscillate in the middle of the range of G10 relative strength.

On Thursday, DXY took a sizeable hit in the morning after Treasuries opened the session higher that kept a ceiling on yields as the 10Y yield dropped toward 2.45% causing DXY to fall in the session before reversing after the 11am EST London fix.Traders that are comfortable with the Ichimoku Cloud can keep an eye on the 240-minute chart to use the cloud as resistance before trying to get aggressive and “buy the low.” The cloud currently sits near 114 and the zone above 114 would be the 115.60 level we mentioned last week as resistance, which was never overcome.

On the downside, traders should keep an eye on a zone of prior pivots near 111.45/88. This level would take us below the 38.2% Fibonacci retracement point of the post-election rally. A break below there would favor a move to 110, which is the 50% retracement, and a zone we’ve been watching as possible downside support since early January.

There remains a large consensus that JPY strength is likely short-lived. Therefore, a break above the resistance mentioned above could be the beginning of an aggressive to and through the December high of 118.61.