On January 29, 2016, The Bank of Japan dropped a massive surprise on Financial Markets by introducing negative interest rates. What was equally, if not more surprising was the eventual market reaction to the JPY following the negative interest rate announcement. After an initial JPY sell-off that provided USD/JPY the highest tick of 2016, the JPY went on a multi-month Bull run that led to multiple attempts and failures near ~100¥ per USD.

Eventually, an introduction to Yield Curve Control by the Bank of Japan on September 21 combined with the “Reflation Trade,” that came on to the scene aggressively after the Trump election that eventually took USD/JPY from 101 to 118 in December. After trading at 118.61, USD/JPY eventually went on an intermediate downtrend where it fell by as much as 5.4% in January.

Looking at the chart, it appears favorable that a break above the resistance zone that will soon be explained could align with a resumption of JPY weakness or the currently unfavorable USD strength picture. The reason that favoring USD strength as a larger theme is unfavorable towards the end of January is that on a relative basis when measured on an H4 chart, USD is the weakest currency within the G8. Presuming strength from weakness can be a type of analytical alchemy that typically fails to play out in a manner that most hope.

The chart is likely drawing excitement as the price of USD/JPY has broken above the H4 Ichimoku Cloud. For traders that have attended my Ichimoku Webinar, they are aware that the lagging line (bright green on chart) is the momentum-confirmation component. Therefore, we have a price that has traveled up to pre-defined resistance without the lagging line showing a Bullish sign. You will also notice a well-defined support zone at 112.53. Traders looking to go long will likely be placing initial stops below this spot as a breakdown through 112.53 could indicate a strong continuation of the January trend lower.

The resistance component that is worth focusing on is comprised from the 50% retracement of the 2017 range at 115.568, which aligns nicely with the January 19 high and the January 5 low. Traders should be on the watch for a breakout as we’ve broken above the corrective channel that was drawn with the Andrew’s Pitchfork tool as well as the Ichimoku Cloud.

A close above the polarity zone of 115.56 on a daily basis would align with a break above the January 19 high and would bring lagging line of H4 Ichimoku above the cloud that could indicate a strong move higher is developing. JPY is showing weakness across the board, so the combination of twoweak pairs makes both scenarios as possible. 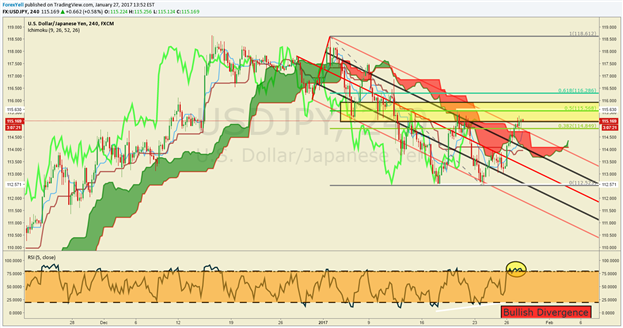