JPY strength has been a prominent theme as Donald Trump begins his first week as US President. The strength appears to come on the back of USD losses that can also be seen with EUR/USD hitting the highest levels of 2017.

USD/JPY made an impressive run off of 112.57, the current 2017 low that we focused on in the last post. The run off this low totals 300-pips and we showed how you should keep an eye on the key Fibonacci zone. So far, USD/JPY turned sharply off the 50% retracement of the December-January range at 115.617. From here, a breakdown below 112.57 could signal that the recent retracement to 115.617 was a loading up opportunity for an aggressive move that could take us to the key Fibonacci Zone of the post-election rally from 101.19, the November 9 low to the December 15 high of 118.662.

Many long-term traders are continuing to anticipate that USD/JPY will eventually turn around higher to take out the December high, which could bring out many punters trying to get long between 110-108. You can already see traders getting long exposure on the recent breakdown via our SSI tool.

It is important to understand that this new positioning from traders could lead to more traders loading up on long trades at this zone because a further breakdown, sub-108 could bring about a capitulation and a strong and fast move lower. Such a move would likely begin to put pressure on the November 9 low of 101.19.

However, if the price can break above the recent pivot (50% of the December high to 112.57-current January low), we could also see a similar capitulation from traders holding shortpositions, and an aggressive move higher. 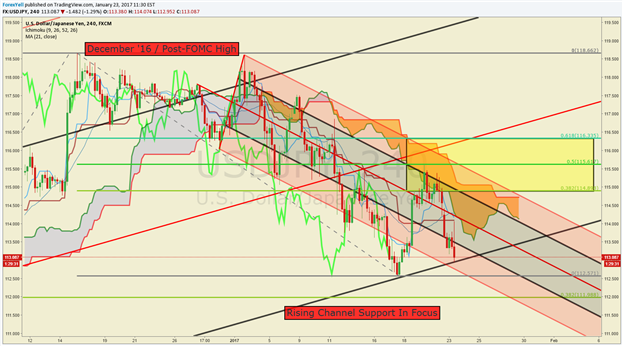