USD/JPY Technical Analysis: All About The Yields

When the USD moves, USD/JPY shakes, and that is exactly what happened mid-week ahead of the transition to Donald Trump as U.S. President. Wednesday began a slew of important speeches that began with Janet Yellen, Chairwoman of the Federal Reserve, noting that the Fed would continue to stay the course with rate hikes, which helped lift U.S. Treasury Yields and subsequently USD/JPY.

USD/JPY has moved higher by ~300 pips in less than 24-hours and has retraced half to the 2017 Macro Opening Range.The move higher has notably caught the attention of traders looking for the next great Bull market in USD to align with Donald Trump taking office, which is possible if his inauguration is aligned with a sharp move higher in yields. It now appears after Yellen’s rather hawkish talk on Wednesday that any move higher would need to come from the market’s anticipation that Trump will bring inflation, which would push higher the required rate in bond markets globally.

Yellen provided about as much of a boost as possible by signaling to the market the Fed was going to continue tightening despite the uncertainty of how Trump’s policies would affect liquidity and financial markets.

Given the support that Yellen provided Treasury Yields, it now appears that the greatest catalyst for anticipated inflation, and therefore a higher USD/JPY would be Trump.

The move higher in USD/JPY looks to be that of position clearing as short USD/JPY positions were likely flushed out and were right to run for the exits. Holding a trade that moves against you 3-big-figures can be a sobering/ painful experience. Traders that are working to anticipate whether the trend is shifting back to the Bull’s favor would be well-served to keep a sharp focus on the recent lower high of 116.84 and the 61.8% retracement of the 2017 range at 116.29.

A move above the 116.30/84 level would bring three key technical developments that would rightfully take the wind from the out of the Bear’s sails. First, a break above 116.29/84 would be the price and momentum gauge per 240 minute Ichimoku into Bullish Territory. Such a breakout would also take the price above a series of lowerhighs and would additionally cause a Bullish break from the corrective channel we’ve been watching.

While it is possible that the move lower is finished, I would offer a piece of evidence as to why I’d be cautious, and also what it could mean if the downside were done for now. Traders typically utilize Fibonacci Retracement to gauge corrective moves, and they like to focus on the 38.2-61.8% zone. Any correction to a trend that has not retraced that amount is either not finished with the trend correction, or if it is finished, is likely a very strong trend that could aggressively continue the previous trend advancement.

Therefore, if the trend has finished correcting despite not retracing 38.2% of the post-Election move, we could be in for an aggressive move higher in USD/JPY, which would likely be accompanied by an aggressive move higher in yields. The displayed chart below would likely see a move to the December higher followed by an attempt on the January 29, 2016, high of 121.688 followed by the 2015 high of 125.85. Naturally, a failure to overtake 116.29/84 and a turn lower in USD/JPY and US Treasury yields would favor that a deeper, and a more common retracement is still developing. 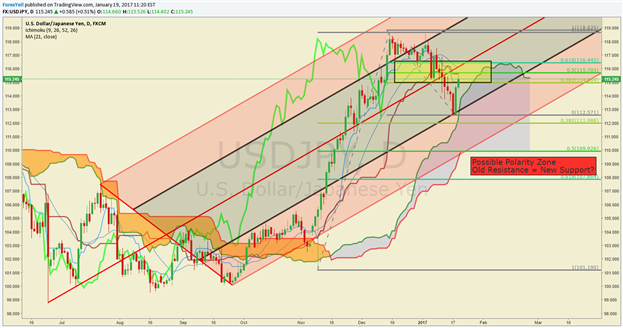