USD/JPY can often act as a helpful proxy as to how the market as a whole is viewing risk. Typically in market sentiment, if USD/JPY is higher, there is a relative sense of calm in markets as JPY is often sold in risk-seeking times. The move higher in USD/JPY after the November 8 election went in line with the aggressive move higher in equities alongside the aggressive sell-off in bonds that helped investors and analysts get a refresher on duration & convexity in fixed income markets.

The recent fall in USD/JPY of ~5% has begun to cause traders to question the post-election rally. Unfortunately, there are strong narratives in markets, but no certainties. One of the key narratives is that the new Trump Presidential administration that comes into office this Friday has been riding a fiscal wave to project likely inflation and dollar repatriation that has been perceived to be a net-positive for USD and inflation expectations that have driven USD/JPY higher.

However, as the narrative begins to come into question, though many of us at DailyFX believes the Strong-Dollar/ Inflation story resumes later this year, USD/JPY has broken down. From a technical perspective, there is a clear zone of support to watch below the current price of ~113 that is comprised of the Daily Ichimoku Cloud as well as the Fibonacci Zone that we’ve long been watching.

The namesake for this article also comes from a technical phenomenon where a deep retracement tends to steal the Bullish sentiment that builds over the prior rally. It does not mean the larger rally is over, but rather the Bulls no longer have the impetus to buy at the slightest economic sign of trend continuation. Put simply; there is now a higher bar to overcome for a strong Bullish move in USD/JPY than in the recent past, which should keep traders cautious who are trying to, “buy the low.”

A move down to this zone would likely bring in many value buyers as the long-term view of higher inflation remains, although there remains certainty on when it will begin to outstrip expectations in such a way that Fed becomes more aggressive. The aggressiveness of the Fed and the market’s response would likely be seen by a resumption higher in US Treasury Yields as rates get sold off further due to the large duration risk that many holdings contain. UST Yields have fallen for most of 2017, and are currently down more than 10% from the January high.

Given the interconnectedness of the markets to close out 2016, we would not expect to see a move higher in USD/JPY without a move higher in stocks and sovereign yields. Should an Intermarket move higher develop, we would look to the swing charts (H4 or 240-minute chart) to see if USD/JPY could break above the cloud, or the equivalent on the chart below would be a break above the corrective channel in red. The price has recently broken below the channel, which typically means an aggressive down move is about to be retraced. The other possibility is that we see a transition from an ordinary corrective move into a sharp USD downturn or a JPY breakout, which would likely put markets in a risk-off move for a while.

Only a subsequent break below the support being watched at 110 would bring this view of a consistently strong JPY to the forefront. Until then, we’ll favor this as a deep correction that could soon find it’s footing, which would be confirmed on a break above 115 and the key lower-high of 2017 at 117.53. 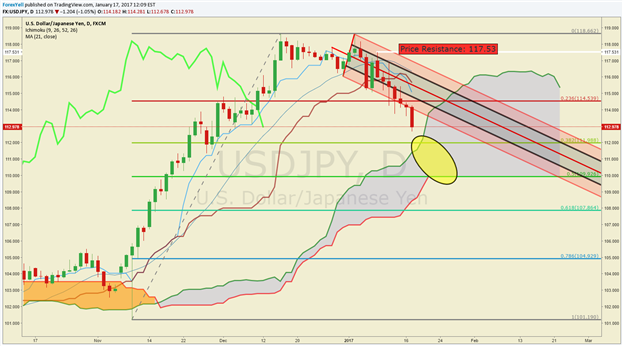