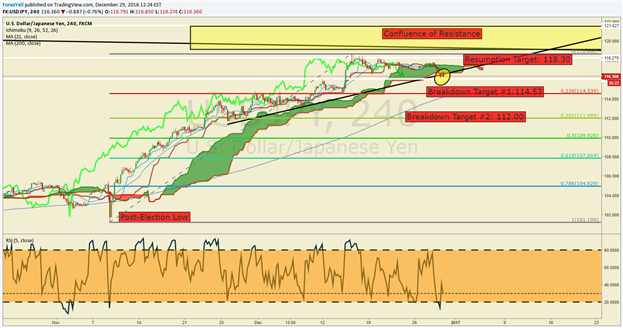 Our last piece highlighted the surprising outright political focus that Japan’s Chief Cabinet Secretary Yoshihide Suga gave to the JPY, which seemed to renew the Currency War rhetoric. A currency war develops when governments and central banks target currency levels for economic gain or a comparative advantage to other economies.

USD/JPY has been nearly vertical since the outcome of the US Presidential election aligned so cleanly with the Yield Curve Control measures introduced by the BoJ. The November-December range so far has been ~17.25%. Given the sharp rise, the uptrend is anticipated to resume in early 2017. However, we’ve had a break below swing support of the H4 Ichimoku cloud that could show there is more JPY strength in the near-term. Earlier, we noted that the zone of support worth watching in this strong uptrend was the December 19 low of 116.56 and the August 24, 2015, low of 116.08. Thursday’s price action brings us within these levels with an intraday low of 116.23.

As James Stanley recently pointed out, a move to this clear support should bring out the long-term buyers and believers in higher USD/JPY. If buyers do not show up, a further breakdown will open up the 23.6% & 38.2% retracement created from the post-election ~17.25% range in USD/JPY.

The resistance worth watching and we anticipate being hit begins with the August 24, 2015, close of 118.275 as well as the confluence of resistance that combines the Trendline off of intraday highs going back to the June 2015 high of 125.85 as well as Fibonacci expansions that extend toward 120.759.

The final upward resistance worth watching over coming weeks should USD strength, or JPY weakness resume isthe 2016 intra-day high that took place on January 29 when the Bank of Japan introduced negative interest rates. While the initial announcement led to a high of 121.627, the JPY would go on to strengthen by over 20% in the following months.