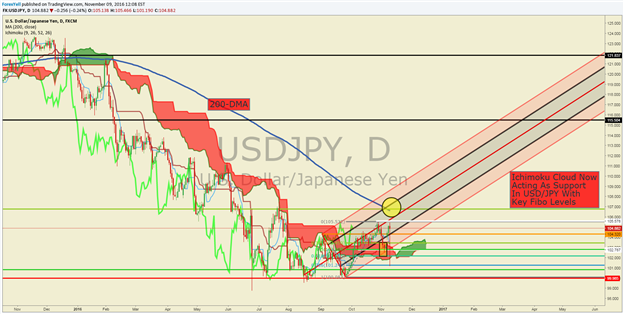 The U.S. 10-Year Treasury Curve has traded above 2% for the first time since January and U.S. Yields tend to be positively correlated to the price of USD/JPY. As the realization of a Trump Victory developed, JPY and Gold went bid after the MXN sold-off. However, a lot of that move has been reversed and could have been triggered on short-term options that were at record levels ahead of the election.

The Trump Rally that USD/JPY has been leading looks to have multiple support points. First, we head overnight as the JPY was strengthening that the Minister of Finance in Japan publicly stated the “rough” moves were being watched could indicate there was also some intervention.

Another key component is the one-day bear market in the VIX, which is supportive of risk-on. The VIX is lower on the day by nearly ~20% with a greater than 30% range. A strong drop in the VIX shows traders are more confident in stable-gains on the CBOE SPX contracts.

The risk-off move unfolding will continue to keep an eye on the yields as we mentioned above, and the inflation expectations on the potential new policies by Donald Trump. The day’s range of ~430 pips shows a lot of hesitancy to hold a JPY long trade as the Yield Curve steepens in the U.S. as well as Gold reversing prior gains.

Further pressure on these levels would likely be met with a rushin or fear of missing out a trade that could keep USD/JPY bid. Two indicators that have been helpful in addition to the zone of support of 99/101 is the Ichimoku Cloud and the Andrew’s Pitchfork channel tool.

The Ichimoku Cloud continues to support the price on a closing basis despite the sharp initial sell-off on Wednesday Morning of trading. Should the price continue to close above the Ichimoku Cloud, there is little reason to fight the potential for a strong base developing.

Lastly, the Andrew’s Pitchfork Channel drawn off the extreme close on August 16 that registered an extreme for RSI(5) and pivots in September keeps focus higher. For now, Wednesday’s sharp move lower is being treated as part a bottoming process. This view would be validated on a break above the resistance levels mentioned above at 106.63/107.49.