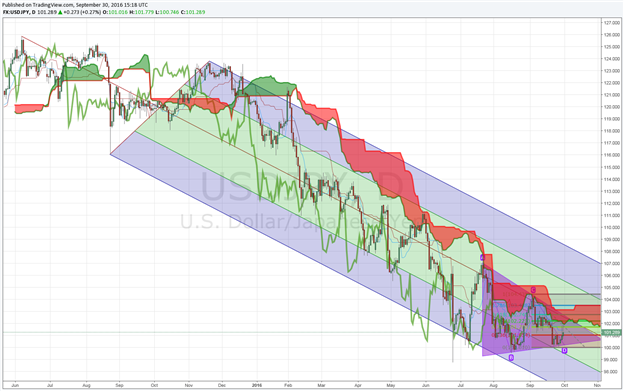 USD/JPY has moved off the psychological barrier of 100 multiple times in rather aggressive fashion since first testing sub-100 after the EU referendum showed a win for the ‘Vote Leave’ group. The ability for USD/JPY to hold above 100 doesn’t mean it is a good time to go long.

If you look at interbank funding, referred to as the global financial system’s plumbing by ADM’s Paul Mylchreest, you can see stress is continuing to build, which could lead to a further unwind of the carry trade that has led to a stronger than expected Japanese Yen. The reason du jour of the interbank funding stress has recently been blamed on liquidity worries at Deutsche Bank. There has been a clear trend for 2016 of higher borrowing costs for USD funding with 3-month USD/JPY cross-currency basis trading near -80bps, the widest since April 2011 per Bloomberg data when USD/JPY was trading near 80.

Looking above, you can see what appears to be a very clear downtrend alongside the Ichimoku Cloud, and Andrew’s Pitchfork, and a Triangle Patter consolidation (purple.) When a strong trend is clear, any consolidation is favored as a prelude to a continuation of the trend as opposed to a basing effect before a strong move higher.

While the USD has performed well against some currencies during the recent stress, the JPY is unique in that the carry trade where JPY are borrowed to buy higher-yielding assets continues to unwind and lead to unrelenting JPY strength.

The price continues to revolve barely above 100. Of the Indicators above, Ichimoku Cloud would be one of the first to register a Bullish signal on a break and close above 103.12 on the daily chart. Short-term resistance looks to be the 61.8% retracement of the September range, which sits at 102.75. The zone between 103.12/102.75 should make for good resistance if we are on the precipice of another breakdown.

Lastly, the Andrew’s Pitchfork (Red) would not concede that the Bear Run in USD/JPY is likely over until a break above the internal upper parallel line that aligns nicely with the 50% retracement of the 4-Month Range at ~105.50.