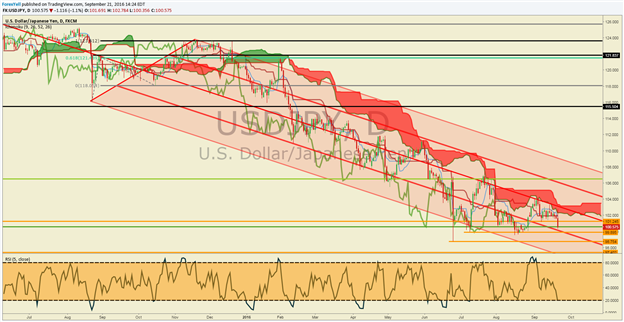 After the Federal Reserve had announced that they would hold rates on Wednesday, USD/JPY traded as low as 100.36. Wednesday included both the Bank of Japan, which many hoped would bring in a stop to the JPY strength with a new form of easing, as well as the Federal Reserve making it one of the more hotly anticipated trading days of 2016.

However, the market didn’t get what it apparently wanted in the form of JPY weakness or USD strength. Instead, the Bank of Japan is now dealing with a stronger JPY that is trading against the USD at ~100. Now, Bank strategists are thinking this morning’s, “whatever it takes moment,” from the BoJ landed on deaf (or numb) ears, and we could be on our way to 94 by year-end.

For those unfamiliar with the direction the Bank of Japan shifted policy from mainly bond purchases and negative rates to targeting the Yield Curve, you’re not along. The move is a new venture for central banks that are seen as running out of room and assets to stimulate the economy to reach their inflation targets for all the trillions that have spent. By seeking to control the yield curve, and specifically, they are looking to target the 10-year Japanese Government Yield at 0%, Japan is hoping to put an end to deflation while at the same time helping those that were hurt most with the negative interest rate announcement on January 29, the banks.

While “yield curve control,” is new territory for the Bank of Japan, it rhymes with actions taken by the Federal Reserve in 2011-2012 when they engaged in “Operation Twist.” Operation Twist was focused on swapping out shorter-dated Treasuries for longer-term Treasuries to flatten the yield curve, which banks and borrowers look to see what is expected in terms of growth and inflation. Since the Fed engaged in such actions, the US Dollar has risen nearly 30%, and yields across the curve have remained depressed. Many expect Japan to avoid a similar fate.

Looking above, you can see what appears to be a very clear downtrend alongside the Ichimoku Cloud, and Andrew’s Pitchfork (Red).

The price continues to revolve barely above 100. Of the Indicators above, Ichimoku Cloud would be one of the first to register a Bullish signal on a break and close above 103.20 on the daily chart.

Lastly, the Andrew’s Pitchfork (Red) would not concede that the Bear Run is likely over until a break above the upper parallel line that aligns nicely with the 38.2% retracement of the 12-Month Range at ~109.