USD/JPY Technical Analysis: Are The Bulls Ready To Rumble?

USD/JPY is closing at one-month highs ahead of Friday’s critical Non-Farm Payroll report. The significance of the employment report in the US is that Federal Reserve VP Stanley Fischer seemed to warn markets at Jackson Hole that a good employment report (consensus est. 180k) would open the door for two rate hikes in 2016 if the data continues to validate they’ve reached their goals.

Since Fischer’s comments, the US data has been coming in strong, while Japan’s has been weak enough to spark speculation about the BoJ accommodation, that USD/JPY is closing August at monthly highs and USD as a whole is near the top of the leader-board in G10FX. What is amazing about USD’s relative position is that last week before Jackson Hole, USD was the weakest G10 currency. What a difference a week makes. Especially when the VP of the Fed starts talking not just one, but maybe two hikes this year.

Looking above, you can see what appears to be a very clear downtrend alongside a 200-WMA (currently at 107.40), Ichimoku Cloud, and Andrew’s Pitchfork (Red).

The impressive move higher is still taking place within a larger downtrend, which the various indicators on the chart above show you. Of the three indicators, Ichimoku Cloud would be one of the first to register a Bullish signal on a break and close above 105.20. The next breakout of a long-term indicator would be a weekly break and close above the 200-DMA (currently at 107.40), which you can see in the chart below has provided a good bias for longer-term trends.

Lastly, the Andrew’s Pitchfork (Red) would not concede that Bear Run is likely over until a break above the upper parallel line that aligns nicely with the 38.2% retracement of the 12-Month Range at ~109.

Should these three levels be broken in September, and the Speculative Sentiment Index flip negative (more on that below), we could be seeing the changing of the tide in FX as JPY becomes defensive on a large scale and USD returns to dominance as the result of a surprisingly hawkish Fed.

The chart above shows the big picture for USD/JPY beginning with the descent from the Great Financial Crisis that eventually took USD/JPY down to 75.55. What’s important about the retracement from 125.85 toward 98.52 after the Brexit announcement is that we’ve stabilized well around the 50% retracement level of the 2011-2015 range, and we’ve also found support at the 2014 low before the last leg higher began. There are no guarantees in markets, but this looks to be a great place to find support before a solid attempt toward 110+. Of course, much of this is predicated on both central banks playing their role in a higher USD/JPY. 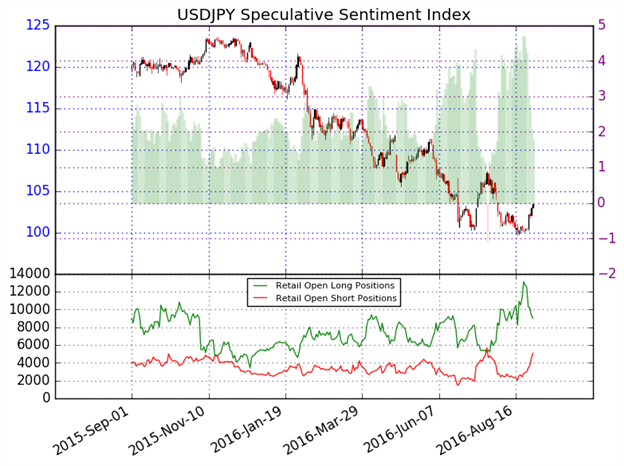