Quiet Now, But Traders Are Bracing For Large Moves Ahead

USD/JPY, along with other markets like the S&P 500 (CFD: SPX500) has been looking at historic lows. Based on trader’s sentiment per SSI, traders are expecting or hoping for a large move higher in USD/JPY off the perceived floor of 100.

While we await Jackson Hole’s culmination of Janet Yellen’s speech titled, ‘The Federal Reserve’s Monetary Policy Toolkit,’ traders have their sites more focused on September 20-21 where the Bank of Japan will meet with some continuing to speculate about the possibility of Helicopter Money or another new form of Quantitative Easing.

The focus on the possibilities of the late-September BoJ meeting followed by the Federal Reserve meeting where recent Fed Presidents have encouraged traders to be on alert for a possible rate hike. This combination of events has brought one-month implied volatility to one-month highs, which has put the probability of a December rate hike above 50% per Bloomberg and a 30% probability of a September 21 hike.

As of Thursday, there is a ~4% premium of 1-month implied volatility to 1-week volatility that can help you see what is anticipated to traders on possible central bank action. In addition, Friday will combine Janet Yellen’s speech as well Japan’s inflation data, which will likely spike the anticipation of the upcoming meetings.

Looking above, you can see what appears to be a very clear downtrend alongside a 55-DMA (currently at 103.09). You will also notice that Andrew’s Pitchfork (Red) and the MVA provide clarity to prefer the downside continuation. What has surprised many is that the low-volatility continues to persist.

A famous quote from Hyman Minsky, the noted economist stated that stability begets instability, and the low-ATR looks show signs of stability. Naturally, looking at the implied volatility, such low-volatility environment are unlikely to last.

We will touch on the sentiment picture more below, but it’s worth noting that the contrarian indicators are showing retail is continuing to buy aggressively, which also seems to favor trend continuation.

For now, shorter-term resistance will be at the Opening Range high of August at 102.645. This resistance, if broken would be followed by the 55-DMA. Regarding near-term support, the August 16 low of 99.522 will be watched to hold to see if there is any hope for JPY bears.

However, USD/JPY Sentiment Shows Traders Still Have Hope For Upside as ¥100 Holds 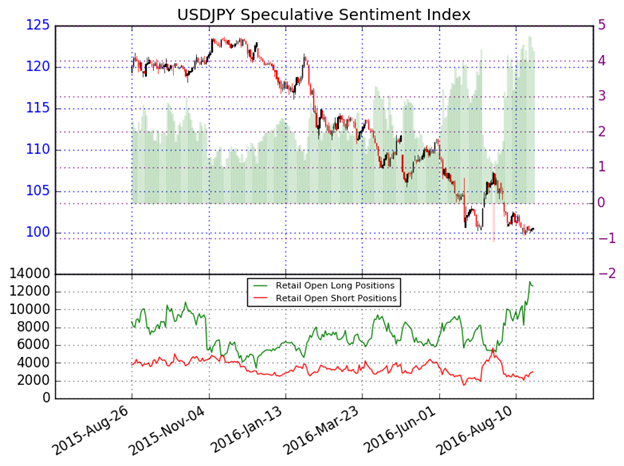 When looking at sentiment, the most pressing development is a rise in new short positions. As of Thursday, the ratio of long to short positions in the USDJPY stands at 4.27, as 81% of traders are long.

We use our SSI as a contrarian indicator to price action, and the fact that the majority of traders are long gives signal that the USDJPY may continue lower. The trading crowd has grown less net-long from yesterday but further long since last week. The combination of current sentiment and recent changes gives a further mixed trading bias.