On Tuesday, USD/JPY fell back below 100.00 as the US Dollar softened on an article published by San Francisco Federal Reserve President John Williams. In the article titled, Monetary Policy in a Low R-star World, Williams argued that the natural or neutral rate that neither stimulates nor prevents market growth has fallen. Furthermore, there was a call for a new monetary policy framework all of which implies that it will be difficult for the Fed to raise rates credibly.

This brought about strong Dollar selling bringing some even to call ita crash. Either way, we’ve seen a continuation of a ‘barbell strategy’ that gets its name from institutions buying both the riskiest and safest investments. The high-risk side of the barbell has mainly meant a flood into Emerging Markets and commodities on the back of a weakening US Dollar. The safe side of the barbell has been a consistent bid of treasuries and other havens like the JPY, which continue to presson.

As of August 16, the JPY has strengthened by nearly ~20% YTD vs. the USD. An additional narrative that is failing to take hold is a possible rate hike in the coming 12-months from the Federal Reserve. The lack of a Fed-Driven stronger Dollar removes half of the recipe for USD/JPY to push higher and further argues for staying with the downtrend. The other half of the narrative has been a possible “Yen-tervention,” which is always possible, but is looking more distant than earlier perceived.

On Tuesday morning, Japan’s Finance Minister Masatsuga Asakawa noted that while trading was thin (meaning the market is ripe for sharp moves), they are “watching to see if there are any speculative moves.” This statement could mean they would only act on an abrupt strengthening of the JPY by an obvious short-squeeze that could mean a ~5% strengthening in one session. Either way, we do not appear to be there yet.

Looking above, you can see what appears to be a very clear downtrend alongside a 200-WMA (currently at 107.15). The chart above does not show the long-term significance of the 200-WMA, but the break below favors further downside. Only a sustained break above the 200-WMA would tilt the bias for JPY selling.

The two horizontal lines on the charts are Support thresholds that held for months on the way up from ¥77 to ¥125. The top line is ¥100 that held as support in H12014 before the market tookoff again as the US Dollar Bull Market raised without slowing down from July to March. The second line was the H22013 Support at ~¥97, which appears to be a natural support level should the price of USD/JPY begin to break below of 100 more consistently.

We will touch on the sentiment picture more below, but it’s worth noting that the contrarian indicators are showing retail is buying aggressively, which also seems to favor trend continuation.

Shorter-term resistance will be at the Opening Range high of August at 102.645. Regarding near-term support, the Friday, June 24 low of 98.77 will be watched to hold to see if there is any hope for JPY bears. 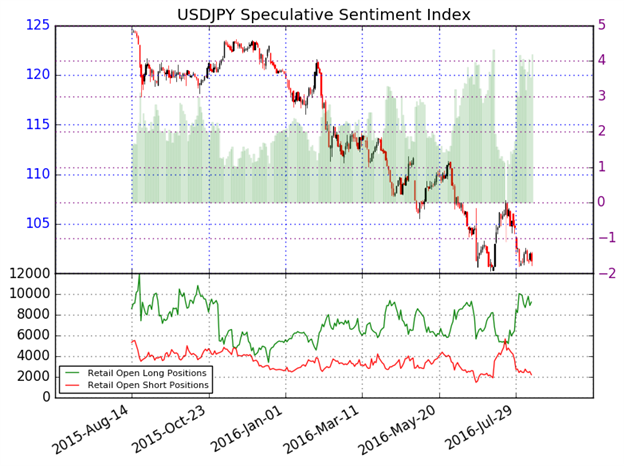 When looking at sentiment, the most pressing development is arise in new short positions. As of Friday, the ratio of long to short positions in the USDJPY stands at4.18 as 81% of traders are long.

We use our SSI as a contrarian indicator to price action, and the fact that the majority of traders are long gives asignal that the USDJPY may continue lower. The trading crowd has grown further net-long from yesterday and last week. The combination of current sentiment and recent changes gives a further bearish trading bias.