USD/JPY fell back below 101.00 as the US Dollar softened on a weak Retail Sales number ex-autos early Friday. While the late July BoJ meeting disappointed JPY Bears, there appears to be a consistent pressure on low-yielding currencies like the US Dollar, Euro, and British Pound.

Previously, we have mentioned the importance of the 200-WMA that has provided appropriate directional biases since 2008. The current level of the 200-WMA sits near ~¥107 per Dollar. As you can see in the chart below, there is a lot of resistance above the price of USD/JPY in addition to the 200-WMA that should put caution to USD/JPY value buyers.

As of August 12, the JPY has strengthened by nearly ~16% YTD vs. the USD. An additional narrative that is failing to take hold is a possible rate hike in the coming 12-months from the Federal Reserve. The lack of a Fed-Driven stronger Dollar removes half of the recipe for USD/JPY to push higher and further argues for staying with the downtrend.

Looking above, you can see what appears to be a very clear downtrend alongside a 200-WMA (currently at 107.04). The chart above does not show the long-term significance of the 200-WMA, but the break below favors further downside. Only a sustained break above the 200-WMA would tilt the bias for JPY Selling.

The Bearish Price Channel (Red) is drawn from the June 2015 High, the August 24 low and the November high. This channel has contained the price rather well, and until there is a sustained break above the channel median-line (104.75), which is roughly the top of the Ichimoku Cloud, it is difficult to say with a straight face that the Bull market may soon resume.

Shorter-term resistance will be at the Opening Range high of August at 102.645. When hope springs for a new uptrend, a series of higher low is typically the best place to focus. That high-low and significant current support is ¥99.975 per USD. Below the higher low, the Friday, June 24 low of 98.77 will be watched to see if there is any hope for JPY bears. 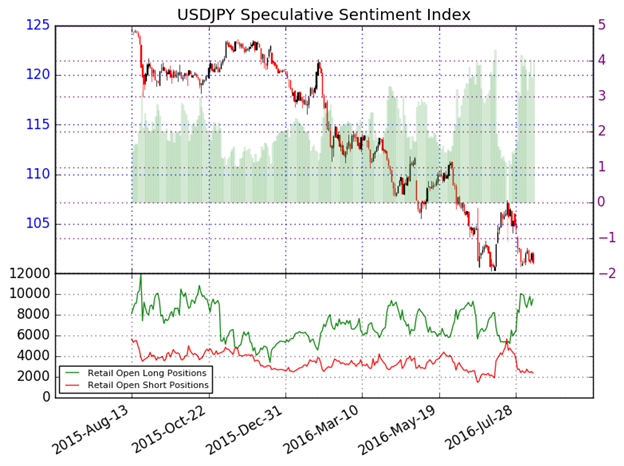 When looking at sentiment, the most pressing development is a rise in new short positions. As of Friday, the ratio of long to short positions in the USDJPY stands at 3.77, as 79% of traders are long.