To open the week, US Dollar has strengthened by ~1.25 against the JPY and from the opening range low of May, USD/JPY has moved higher by ~2.8%. Monday’s move brought USD/JPY to its highest levels since April 28, when the BoJ failed to announce additional easing. However, since late April, we’ve seen a few developments worth noting.

First, the US Dollar just capped off its best week since November on a combination of oversold sentiment unwinding and recent comments from BoJ member Taro Aso, who said they’re keeping an eye current JPY strength. Many have discounted the short-term risk of BoJ intervention ahead of the G-7 Summit later this month that Japan is hosting.

While the underlying environment is altogether different than in October/ November 2014 when the BoJ doubled their QQE program, many traders understandably are wondering if we are now bouncing off the ~105 level that has been a long-term pivot. In December 2013 & October 2014, the 105 handle was a sticking point that leads to large moves. If the US Dollar can gain a respectable and consistent bid

USD/JPY saw such a sharp drop after the “no-decision” by the BoJ at the end of April, and now the range of key support and resistance is set rather wide. The April 28 high of 111.88 and the 55-DMA near 111 make up rather strong resistance. Additionally, those levels align for a key lower high level that if broken could indicate a strong move higher toward the key pivot of H2 2015 & Q1 2016 near 115/6.

Support is equally thin above the May 3 low of 115.54. Given today’s strong move, the open/ low at 107.03 would be the first and most appropriate level of short-term support followed by Friday’s low of 106.42. Given the strong trend lower as shown via the two price channels with negative slopes, the burden of proof remains on the bulls, and only key breaks above long-term resistance will start to favor their argument. While I’m favoring the upside on the risk of “Yen-tervention”, a break back below support will put me back on the sidelines and look for other pockets of US Dollar weakness to play. 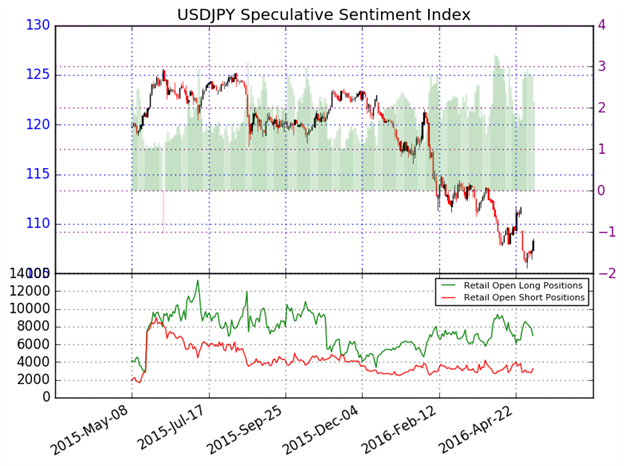 As of mid-day Monday, the ratio of long to short positions in the USDJPY stands at 2.13, as 68% of traders are long. Long positions are 11.4% lower than yesterday and 19.2% below levels seen last week. Short positions are 8.8% higher than yesterday and 11.6% above levels seen last week. We use our SSI as a contrarian indicator to price action, and the fact that the majority of traders are long gives signal that the USDJPY may continue lower.