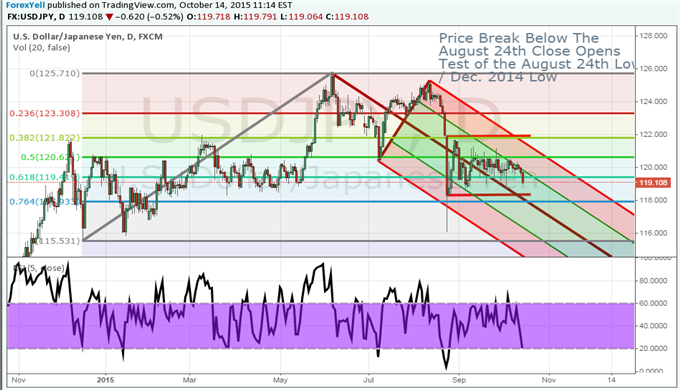 USD/JPY Technical Analysis: Rolling Over to the Downside

Multiple forms of long-term resistance between 123.38 and 124.95 capped the upside move. Now, price appears to be turning lower and could soon accelerate break below recent support towards the August 24th low. While the market seems neutral right now, a larger correction of the move higher from 2011 could take us towards 110. Additionally, the highly correlated JPN225 to the USDJPY has failed near Ichimoku resistance, which could signal that more downside is ahead.

USDJPY remains fixed between 121.85 and 118.50 after the August 24th fallout. We recently noted that the move after August 24 has followed with the tightest volatility range in over three decades. However, lack of volatility often precedes great volatility, and US dollar weakness is causing us to be alert to the downside break. RSI(5) has also found resistance at the 60 handle on the daily chart, which can show that were moving into a territory of prolonged price weakness if resistance holds.

Although USDJPY continues to hold above range support of 118.50, aggressive bids are obviously absent. Should buyers failed to materialize as they have in the past, a breakdown below the September 4th low and Aug. 24th close of 118.40/58, opens the door for a challenge of 116.082. Assuming a breakout can be a dangerous game and with the RSI holding resistance and dollar weakness, we favor the outlook of a lower USDJPY. It would be irresponsible not to mention the need for protection should BoJ come out with surprise easing. Traders could be well-served with a stop and reverse order in case they are in an opposing trade when a breakout occurs against their original play due to Central Bank intervention.