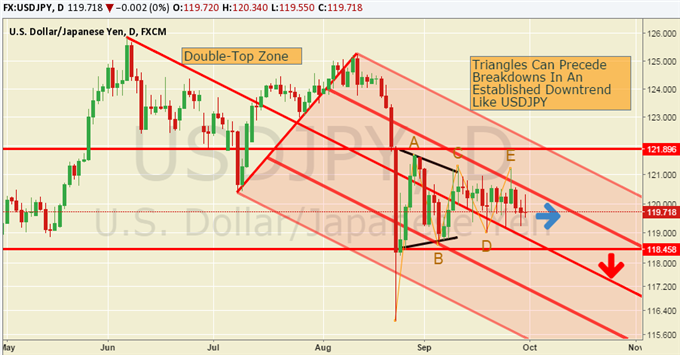 As stocks finish off their worst quarter in four years and commodity finish off their worst quarter since the Great Financial Crisis, many would expect JPY to be incredibly strong, but it isn’t. The Japanese Yen is to be known as a safe haven currency and therefore strengthens in times of unrest in global financial markets however, many traders remember the October 30, 2014 surprise easing by the Bank of Japan and appear unwilling to buy yen ahead of such a massive potential devaluation. So if poor equity performance, falling US rates, and a meltdown in high yields and commodities are enough to strengthen the yen, what would be? A reluctance of the Bank of Japan to increase easing appears to be the only measure that could prevent JPY from strengthening across the board if the Q315 trends continue into Q4. Also, as per the Commitment Of Traders report, yen short positions are near multi-your lows showing there is not the typical unwind with seen in times of risk-off.

The easiest levels to pay attention to are the open and close price on August 24, 2015. A little more than a month later, we are still trading within these levels which are comprised of a close of 118.40 that will act as long-term support and an open of 121.89 that will act as resistance. Subsequently, 121.89 is also around key resistance much earlier in the year and from a longer-term perspective, think over 10 years, the move above 125 in May could be seen as a false breakout if we do in fact see weekly close below 118.35. Should the bear scenario develop, the first zone we would look to for profit targets on the downside would be one 116 / 115.40, which comprises the December 2014 low as well as a double top target using a neck line of 120.32.

Given a global focus on this currency pair, a breakout in either direction could cause a lot of people to hop on board and push it to new extremes relatively quickly. The more bearish scenario for the global economy and one that could easily be a faster mover would be the break and close below 118.35 and no BoJ easing. I say that it is bearish for the global economy because of the extreme negative correlation that USDJPY has with the S&P 500. The case for a one cancels other order is strong on a break above 121.89 is that hope remains for BoJ easing in October as well as dollar outperformance across the board, but again price needs to be our guide in the levels of 121.89 and 118.35 will be our first indication of the next big moves in global markets rather higher or lower.