- The bearish trend in USD/CHF has started to come into question as strength has started to show on shorter-term charts, marked by a bit of higher-low support after prices hit a fresh six-week high last Thursday.

- Longer-term charts in the pair remain bearish in nature, with price action now testing a key zone of confluent support. If prices remain below this resistance today, the door remains open for short-side swing-strategies in USD/CHF. If this resistance is taken-out, the door is opened to shorter-term bullish strategies targeting the psychological level of .9500.

As US Dollar weakness was permeating throughout the FX market in January and February, USD/CHF exhibited one of the cleaner trends across the USD-spectrum. This led to a test of the two-year low earlier in February, which was eventually eclipsed just a couple of weeks later as prices burst down to find support at .9184. As buyers were coming into the pair along with shorts covering up prior positions, a spate of strength started to show as we moved towards month-end, and as we opened the door to March, prices burst-up to a fresh six-week high just shy of the .9500 psychological level.

It’s what happened after that fresh high that makes matters interesting, as prices pulled back to .9350 at which point buyers began to show-up. That support has now held since last Friday, giving the appearance of building bullish potential on shorter-term charts of USD/CHF. 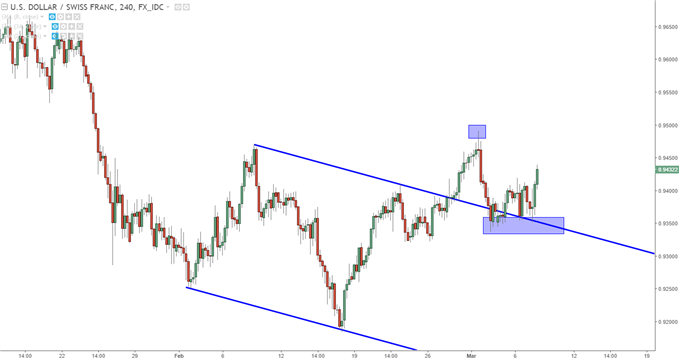 On a longer-term basis, USD/CHF remains bearish in nature, as prices are now finding a bit of resistance off of the 2016 swing-low after a rough and tumble start to the year. That prior swing-low comes-in at an interesting point of .9444, which syncs-well with the 38.2% retracement of the 2018 down-trend in the pair. This can be looked at as a confluent level of resistance that can help to open the door to bullish short-term strategies. 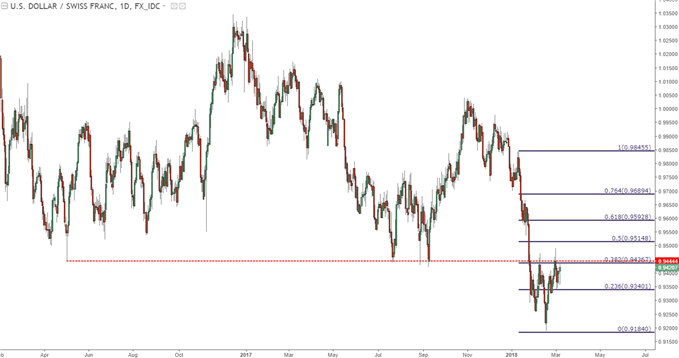 If resistance holds at this level today, the door remains open for short-side strategies of a swing variety, using the psychological level of .9500 for stop placement. A hold of resistance around the .9437-.9444 area would indicate a potential lower-high, and that can keep the short-side of the setup interesting with a longer-term outlook.

But if this level does not hold, and bulls are able to take-out .9450, a test of .9500 appears likely and this can become a target for shorter-term bullish strategies. Just above the psychological level of .9500 we have the 50% retracement of the bearish 2018 move in the pair, and above that, we have the 61.8% retracement at .9593. Each of which can become secondary profit targets on bullish continuation scenarios. 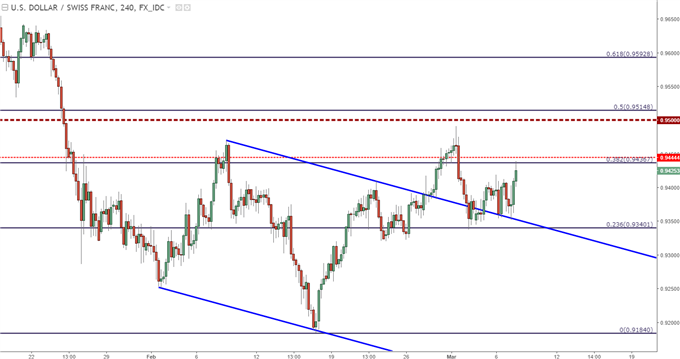