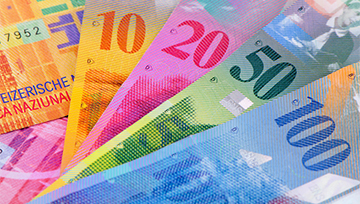 - The hastening in the USD/CHF down-trend mirrors the broader movement in the U.S. Dollar.

The Swiss Franc was unable to avoid the broader trend of U.S. Dollar weakness this week, as another extension of the bearish move in the Greenback helped to bring a fresh four-month-low in USD/CHF. Earlier this morning, we saw the first test below .9550 since September of last year, and a bit of support appears to be showing off of the 61.8% Fibonacci retracement of the major move that spans the May 2015 low up to the 2016 high. This area on the chart is notable for another reason, as this helped to set support throughout the second half of 2016, before the ‘reflation trade’ took over to drive USD to fresh 14-year highs.

USD/CHF Daily: A Revisit to a Prior Support Area, 61.8% Fib Retracement

The drubbing seen in USD/CHF over the past ten days is an aggressive hastening in an already bearish trend. This, of course, is marked by what’s been a very weak U.S. Dollar, but yesterday we also had the addition of CHF-strength which helped to produce this fresh four-month low seen in the pair earlier this morning. At this point, traders need to wrestle with the very real prospect of the pair being so oversold that bearish continuation setups may want to take a step back before looking to continue the trend. On the four-hour chart below, we’re looking at a case of RSI divergence, as the indicator made a higher-low after the pair punched down to a lower-low earlier in the session.

Given this extreme oversold nature after this morning’s hit to the pair, combined with the rather strong bullish reversal that’s shown thereafter, and traders looking at taking on short-side exposure in the pair may want to wait for a cleaner level of resistance come into play before looking to take the pair-lower. The 50% retracement of the same Fibonacci study that we looked at above could be helpful for such a purpose, but on a shorter-term basis there’s another area of interest around .9665 after a double-top printed there earlier in the week.

Are you looking for longer-term analysis on the U.S. Dollar? Our DailyFX Forecasts for Q1 have a section specifically for the U.S. Dollar. We also offer a plethora of resources on our USD/CHF page, and traders can stay up with near-term positioning via our IG Client Sentiment Indicator.