- USD/CHF has been range-bound for more than two years.

- As we move towards the close of 2017, price action remains near the middle of this two-year range.

As we near the end of 2017, the range in USD/CHF has now turned two years old. The removal of the peg from the Swiss National Bank in January of 2015 led to extreme volatility in the Franc; but after settling down in the months following, prices moved into a rather consistent range that’s now held for more than 24 months. Resistance around 1.0300 at the top of the range has shown twice, in December of 2015 and then again in December of 2016.

Perhaps most surprisingly, this range developed while the U.S. Dollar was in the midst of some rather respectable trends. In the latter portion of 2016, the Dollar caught a significant bid as we moved towards year-end after the election of U.S. President, Donald Trump. This created a fresh 14-year high in the Greenback per DXY; but in USD/CHF, we merely saw that revisit to resistance around 1.0300. But, as that troubling USD weakness began to show in the first and second quarters of the year, USD/CHF tracked-along with it, albeit in a more confined manner; eventually running down to support around the .9450 area, at which point buyers showed up to help cauterize losses before prices moved higher.

At this point, there are few reasons to anticipate a break of this range. Price action is currently testing the mid-line of the recent range around .9883, and this can make directional prognosis even more complicated at this point, as we’re in the middle of a meandering section of price action.

USD/CHF Daily: Middle of the Range as we Near Close of 2017 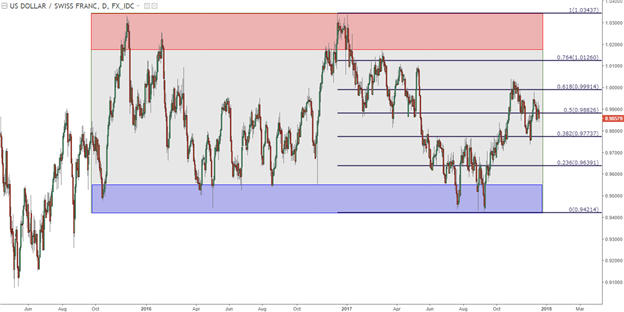