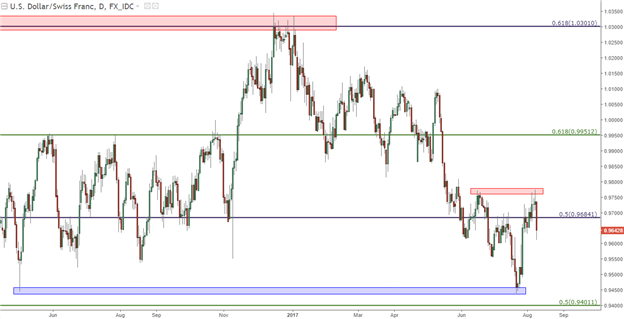 - Swissy is moving back-down after bouncing from prior swing support at .9440.

The down-trend continues in USD/CHF. Two weeks ago, price action found support around a prior swing at .9440, and began to move-higher. For a brief period, it looked as though buyers may be able to take control, as prices ran-above the key Fibonacci level at .9684; but after moving up to the prior swing-high around .9765, resistance showed-up as the upward advance began to stall.

After two days of resistance in this region showed over a three-day-sequence to close last week and open this one, sellers began to take over, and as risk aversion continued into this morning, the pair moved back-down to continue the bearish trend.

This, of course, is due in large part to the continued weakness currently being seen in the U.S. Dollar. This run of weakness in the Greenback has been going for more than seven months at this point as ‘DXY’ has shed more than 10% of its value. Many traders are rightly cautious towards chasing the move-lower, and this could make longer-term setups in Swissy a bit of a challenge at the moment, as we’re still trading above the May 2016 low around .9440.

Given current dynamics, near-term short-side trades could be for traders comfortable looking for a third test of support at .9440. As of this writing, there are approximately 200 pips of potential down to that swing-support, and if using the prior swing-high for stop placement, there would be approximately 140 pips of risk taken on.

For longer-term positions in Swissy, traders may want to wait for a cleaner setup. A support test at .9401 could be particularly interesting for reversal scenarios, as this is the 50% retracement of the major move that spanned May, 2010 to August, 2011. This Fibonacci retracement’s 61.8% level offered numerous bouts of resistance during last summer’s range, and at this point neither the high or low of that major move has been taken-out, so this could be a usable level should support begin to show.