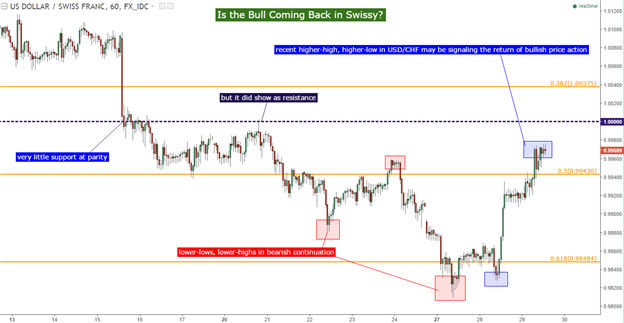 USD/CHF Technical Analysis: Is the Bull Back in Swissy?

In our last article, we looked at USD/CHF after a rather brisk drop through what was thought to be a fairly strong support level at parity. And while parity didn’t offer much for support, it did show up as resistance shortly thereafter, at which point Swissy went on to form even lower-highs and lows. We had highlighted the area around .9850 to look for that next ‘pause point’ in the bearish trend, and support showed-up a bit below that.

But after that fresh four-month low printed in USD/CHF on Monday after the U.S. Dollar gapped-down to start the week, we’ve started to see bullish tendencies on the shorter-term chart. Below, we look at the hourly setup, along with a very recent higher-low and then higher-high that’s printed over the past two days.

Given how young the early development of this bullish move is, traders would likely want to wait for a bit more confirmation and a more risk-controlled setup before looking to push the long side of the pair. There’s a very interesting level/zone of potential support to watch for that higher-low, as the area around .9950 has a plethora of Fibonacci retracement levels and prior price action inflections to denote its forward-looking usability. Just below .9950, at .9908 we have the prior ‘higher-low’, and the area between these two prices can comprise a zone with which traders can look for support in the effort of top-side continuation. If we see a down-side break below ‘higher-low 2’, traders will likely want to question the prospect of continued bullishness, and this can be an interesting type of area to investigate for stop placement should that higher-low begin to show. 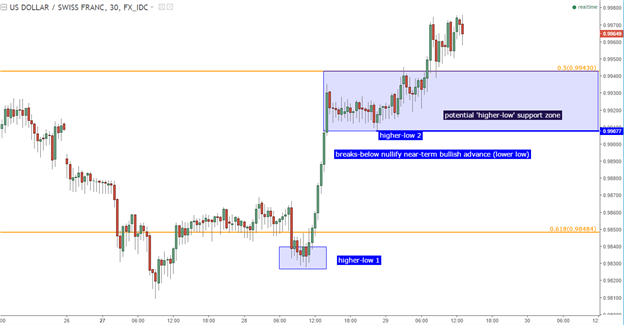